As of today, California’s self-response to the 2020 Census is lower than it was ten years ago. With 62.1% of households responding, the rate is about six points below the state’s final self-response rate in 2010 (68.2%). Even in the best of times, a strong self-response through mail or online minimizes in-person follow-up to nonresponding households. COVID-19 has now complicated such in-person operations.

California’s current response rate is actually slightly higher than the nation’s as a whole (60.9%), and well ahead those of large diverse states like Florida (58.3%), New York (56.2%), and Texas (55.6%). But it is still low for such a late point in the process, and responses have slowed. At the current pace of 0.04% per day, the state will not reach its 2010 self-response rate before the Census Bureau begins in-person follow-up on August 11.

Within the state, self-response has ranged from the low teens in Mono (13.6%) and Trinity (15.1%) to almost 70% in Marin (68.7%) and Orange (69.7%). Mono and Trinity are both rural counties with large numbers of unoccupied houses, like vacation homes, which might explain some of their low response rate. The California Department of Finance estimates that three in ten houses in Trinity and six in ten in Mono are unoccupied. The Census Bureau uses a process called Update Leave to address this problem, and that process is not yet complete. That said, unoccupied housing can’t explain all of the low rural responses. Other rural counties like Butte (46.9%), Colusa (44.3%), and Mendocino (47.9%) likely have fewer empty homes yet they are also lagging the statewide response rate. 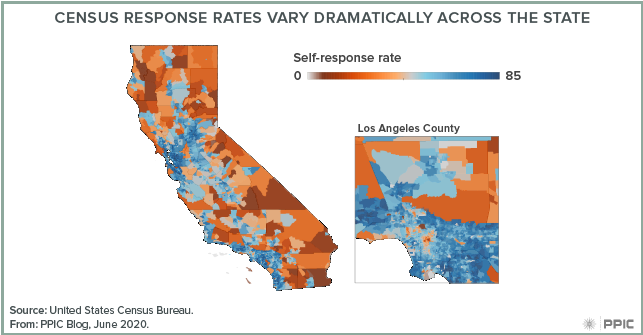 Demographics also play a role, as neighborhoods with large concentrations of Latinos, noncitizens, and renters have especially low response rates. For example, in southwest Fresno and Tulare counties a majority of the population is estimated to be Latino, and the response rates are in the teens. In parts of central Los Angeles where most residents are renters, the response rate is as low as 11.6%.

Los Angeles County will be important to watch. Though the county has long contained many communities at risk of low response, its final 2010 self-response rate (69.0%) was slightly higher than in other parts of California (67.9%). Yet its response rate now (57.4%) lags well behind the rest of the state (63.8%). Los Angeles was hit hard by COVID-19, a factor that may have muffled the census message.

As the state gradually re-opens, planning can begin for creative outreach that allows census workers to connect with households amid constraints meant to limit COVID-19 flare-ups. The job has never been more important. Lower self-response now makes it likely that in-person outreach will carry more of the burden to ensure everyone gets counted, and in-person counting will likely be more complex than in the days before the pandemic.