Is SGMA Compatible with Farmland Preservation?

As implementation of the Sustainable Groundwater Management Act (SGMA) gets underway, questions are emerging about what it will mean for lands protected under the Williamson Act, California’s chief farmland preservation policy. For nearly 60 years, the Williamson Act has helped protect 16 million acres—roughly half of the state’s crop- and rangelands—from development. But as SGMA’s limitations on groundwater extraction go into effect—and as warmer, more intense droughts begin to push land out of irrigation–the context within which the program operates is shifting. In July, we gathered a group of agriculture, solar, and county stakeholders to explore the interplay between the Williamson Act and SGMA in the San Joaquin Valley. Here is what we learned.

What is the Williamson Act?

First enacted in 1965, the Williamson Act authorizes local governments to sign contracts with private landowners that restrict the use of the land to agriculture or open space. In turn, the property’s tax assessments are reduced by 20% to 75%.

These agreements have minimum 10-year terms and automatically renew each year. To terminate a contract, landowners can initiate “nonrenewal”—a process that takes nine or more years, depending on contract length. Alternatively, landowners may request cancellation, a faster option that requires the landowner to pay a hefty fee.

Until 2009, when California was hit hard by the Great Recession, the state compensated participating cities and counties for their lost tax revenues. Most local governments have maintained their programs and several have used a 2011 law (AB 1265) to recoup some revenue by reducing the tax benefit offered to landowners. The amount of enrolled acreage has been fairly stable. In the San Joaquin Valley, Williamson Act contracts still cover 75% of irrigated lands and 46% of non-irrigated lands. This may begin to change, however, as the combined effects of climate change and SGMA implementation motivate Williamson Act contractors to convert their irrigated farmlands to other uses—including water-limited agriculture, habitat restoration, and solar—or to retire the lands entirely. 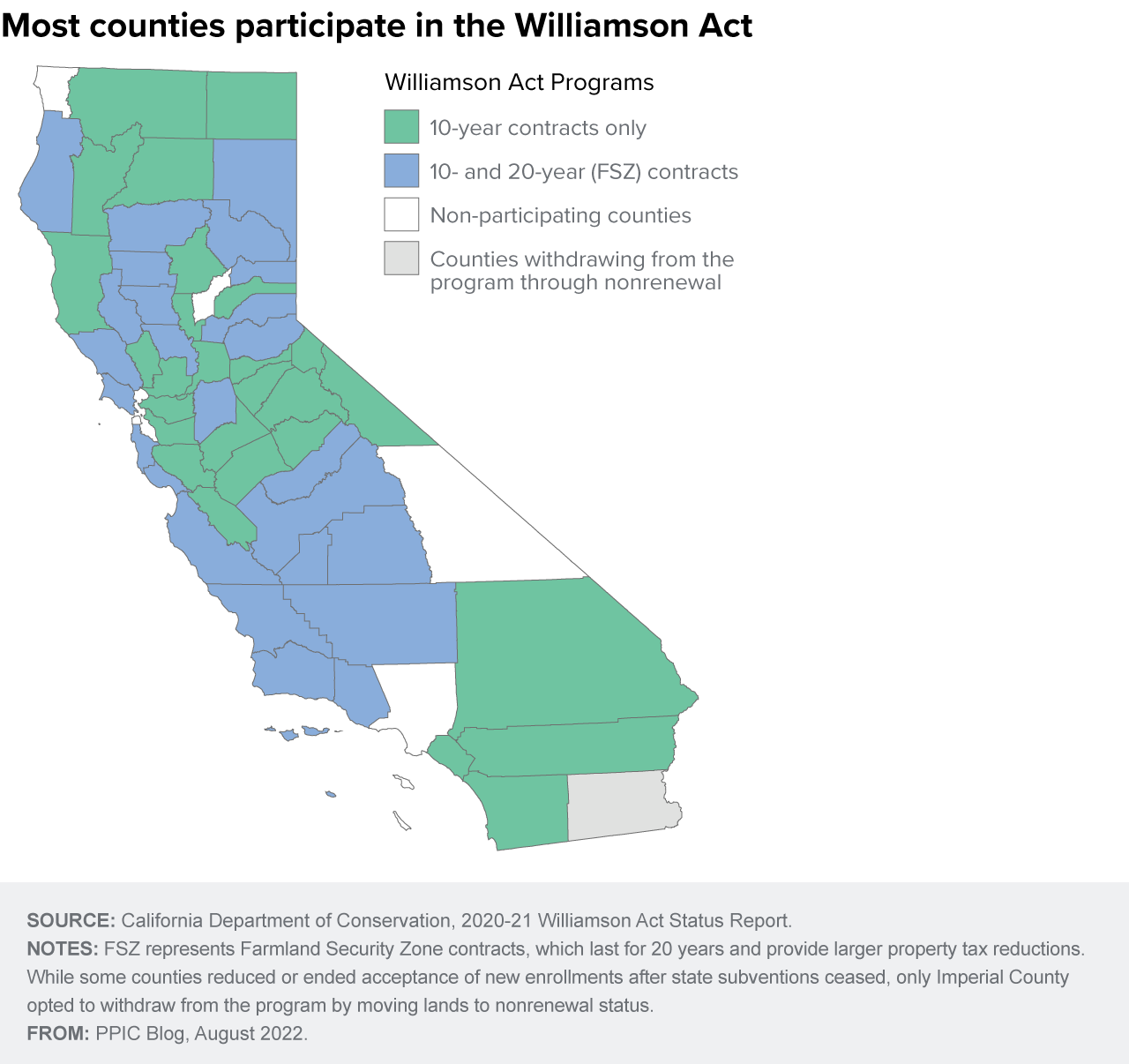 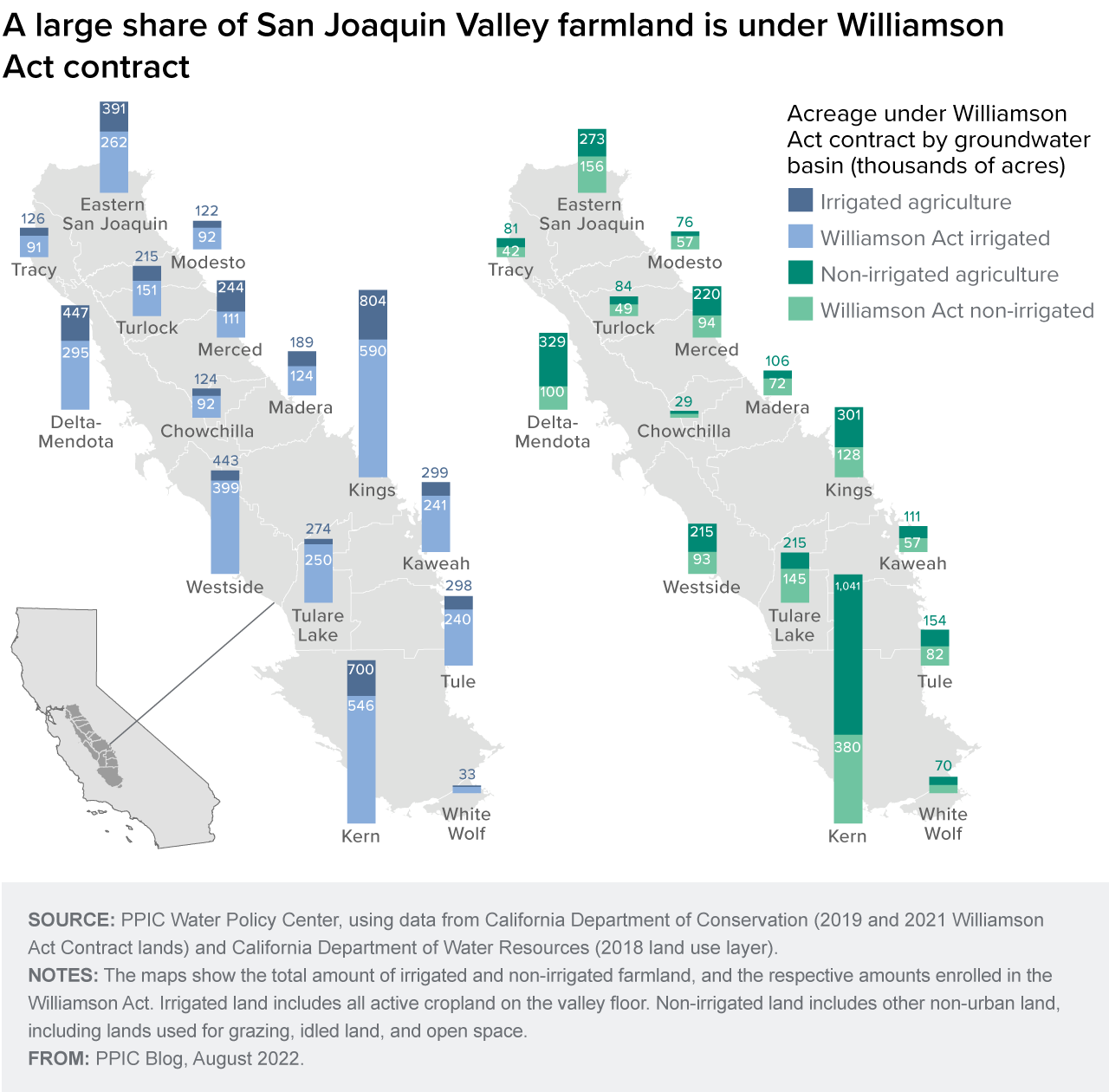 What happens to Williamson Act land that loses water needed to keep farming?

The prospect of SGMA prompting at least half a million acres of cropland (>10%) in the Valley to come out of irrigation by the early 2040s has brought this question to the fore. The answer varies by county and continues to evolve. Broadly speaking, stakeholders in our workshop expressed a desire not to penalize farmers for losing water due to SGMA.

Some alternative uses will likely be compatible with existing contracts: water-limited farming, including dryland cropping and grazing, would remain eligible. Much non-irrigated land is already enrolled in the program, and local governments could use existing contracts to authorize a conversion to other uses. Habitat restoration, groundwater recharge, and land fallowing with cover cropping may qualify as open space. In addition, local governments may authorize cancellation in cases where water is no longer available to the participating landowner. Some counties (e.g. Kern) have begun to do this, although the decision is subject to California Environmental Quality Act (CEQA) regulations and involves a fee.

For solar, it’s more complicated. Solar is a relatively lucrative alternative land use, and the state’s renewable energy targets under SB 100 will require an unprecedented build-out in the same timeline as SGMA implementation. Much of the farmland that is suitable for solar is subject to Williamson Act contracts—including roughly 70% in the San Joaquin Valley. While some counties (e.g. Kern and Fresno) do not consider utility-scale solar as compatible with the Williamson Act, others (e.g. Kings and Tulare) allow it under some circumstances. Landowners who cannot develop solar as a compatible use can pursue cancellation, but the fees can be large.

As for rural county income, California’s solar property tax exclusion means that building solar on farmlands will not substantially increase property tax revenues, even if the lands lose their Williamson Act tax advantage. However, this could change in coming years; a legislative proposal now under consideration would extend and then reduce this exclusion to 50% beginning in FY 2026.

How can the Williamson Act meet its goals in a changing environment?

Overall, the Williamson Act remains popular; counties and landowners strongly support its continuation. But some adjustments could help the program meet its objectives in a changing environment. Legislation clarifying local governmental authority to 1) designate alternative land uses as eligible open space, or 2) cancel contracts where land retirement is the result of SGMA implementation or chronic shortages in surface water supplies, would be helpful steps. This legislation could include expedited CEQA review and waiver of the cancellation fee under these circumstances. Flexibility will be needed for lands that lose their water in the coming decades—legislation may be needed to make these adjustments explicit.