The first half of 2019 saw a substantial decline in the number of new housing units authorized by building permits. This has heightened concern about the state’s housing crisis and cast doubt on whether Governor Newsom’s goal of adding 3.5 million new housing units by 2025 can be met. More importantly, it underlines the need for a deeper understanding of housing markets and what if any action can be taken at state and local levels to move the needle.

New construction has been falling short of demand for many years. Estimates from Beacon Economics put the backlog at about 2.3 million housing units in 2017. In 2018, only 104,000 residential permits were issued—this was well below the pre-recession permitting peak and left the state far below the number of new homes needed.

According to state housing officials, California needs an average of 180,000 new homes every year to make up for current deficits and accommodate future population growth. This number is not unattainable: an average of 200,000 units were permitted each year from 2003 to 2005. However, today the statewide numbers are moving in the wrong direction. In June 2019, residential permits were down 38% compared to June 2018. On an annualized basis, permits were down 16%, totaling about 93,000. Permits for multi-family units decreased even more sharply, by 23%; only 44,400 were issued. 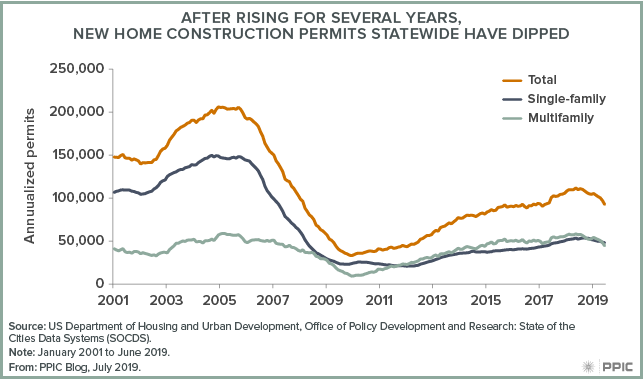 Housing markets and new construction vary widely across the state. In San Mateo, San Diego, Ventura, and Alameda Counties, the number of permits decreased by at least 30%. Meanwhile, in San Francisco and Sonoma Counties permits increased by 66% and 47%, respectively. Part of the increase in Sonoma County is related to the replacement of homes lost during the 2017 wildfire.

This year’s state budget includes $1.75 billion for the construction of new homes, reflecting the fact that Governor Newson has made housing a high priority. A large boost in production will likely also require local land-use and zoning policies change. For example, research has shown that more multi-family housing is needed to address the affordability crisis in the state—but, in many localities, zoning restrictions make it very difficult to increase this type of housing. State-level action in this area has been highly contentious, as it often comes into conflict with local control. For example, Senate Bill 50, which would eliminate some zoning restrictions near major transit lines and job centers, unleashed a great deal of controversy and is now on hold until next year.

Zoning reform is one step toward the goal of increasing housing production, but it is probably not sufficient. Tying financial incentives directly to housing production is a potentially effective state strategy. Moving forward, sustained cooperation among state and local governments and also private developers is critical to addressing California’s housing challenges.