As the legislature and the governor grapple with the projected budget shortfall, it is clear that California lawmakers are expecting Medi-Cal enrollment to increase substantially as a result of COVID-19. While it is difficult to predict the size of the enrollment surge or its budget implications, a look at pre-pandemic coverage patterns offers some insights.

First, the predictions on enrollment size and costs. The governor’s May budget revision projects that the state Medi-Cal caseload will peak at 14.5 million in July. If enrollment does rise to this level, it would mean 2 million more people in the program since January, when Medi-Cal enrollment stood at about 12.3 million.

The legislative budget committees generally agree with the increased caseload projections. However, they rely on the Legislative Analyst’s forecast of the caseload mix, which includes fewer seniors and people with disabilities—groups with more medical needs and much higher costs—than the governor’s estimates. The LAO projections result in state costs that are $750 million lower in the current and next fiscal year than the governor has estimated.

The governor’s revised budget relies on estimates from the Department of Health Care Services that Medi-Cal will have 1.4 million additional monthly enrollees as a result of high unemployment and another 200,000 resulting from the suspension of eligibility redetermination throughout fiscal year 2020–21. This is in line with estimates from a recent Kaiser Foundation analysis that suggests 2 million Californians who lose health coverage as the result of pandemic-related job loss will be eligible for Medi-Cal.

But not everyone who becomes eligible will enroll, particularly if they have no immediate health needs and expect to return to work relatively soon. Preliminary Medi-Cal caseload counts released last week show no increase in enrollment through mid-May; although the final count may be higher, this suggests that the surge may not be as large as anticipated.

Pre-pandemic coverage patterns can provide some useful context. Many of the hardest-hit industries in terms of job loss had low rates of employer-based coverage and relatively high uninsured rates and Medi-Cal enrollment before the pandemic.

Most notably, more than 40% of workers in the accommodation and food services sector—in which employment declined nearly 50% over the past two months—were either uninsured or covered by Medi-Cal. Another 12% had purchased coverage, most likely through Covered California. Other hard-hit sectors—including construction and retail trade—also have relatively high shares of workers who were either uninsured or enrolled in Medi-Cal over the past few years. These patterns suggest that some workers are unlikely to be part of the enrollment surge.

High uninsured rates in some sectors—most notably construction and food services—may be a sign that some workers are undocumented and not eligible for Medi-Cal (except those ages 19–25, who recently gained eligibility through state legislation). Also, workers in many hard-hit industries tend to be relatively young (for example, half of adult workers in food services are under 30); these younger workers may be forgoing coverage because they are healthy. 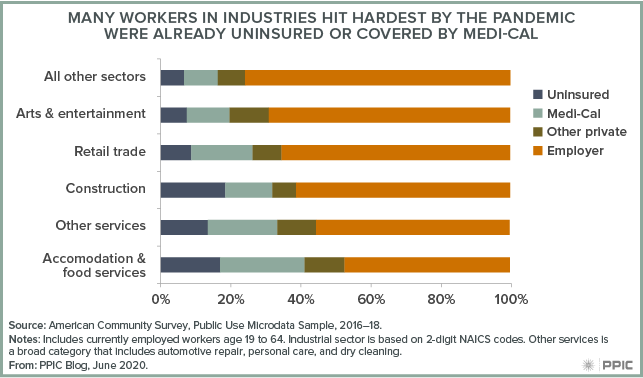 As California moves through the COVID-19 crisis and reopens its economy, it will be crucial to assess how health insurance coverage has changed. Prior to the pandemic, the governor convened a committee to investigate pathways to universal coverage through a state-financed system. The current crisis will likely put this and other major policy changes on hold, and the November presidential election will have implications for health policy. Still, it is important for the state to consider ways to strengthen its health coverage system so that it can weather future public health and economic crises.