Race and Ethnicity Matter in Californians’ Views on Environmental Disparities

Alyssa Dykman August 5, 2020
NEVER MISS AN UPDATE!
Sign up for our blog alerts to receive insights from PPIC by email.

Three crises facing the nation—COVID-19, systemic racism, and the economic recession—have placed environmental justice in the spotlight. Disparities across the environment, the economy, and COVID-19 are inextricably linked to race/ethnicity and disproportionally affect communities of color. At the same time, people of color are more likely than whites to be concerned about these inequities. PPIC’s latest survey on environmental issues takes a closer look at Californians’ views.

Communities of color more often face environmental hazards such as water and air pollution, storms, and heatwaves, an imbalance now amplified by the pandemic. For instance, power plants and oil refineries are disproportionally located in African American neighborhoods, exposing communities to poor air quality and a higher risk for coronavirus.

About six in ten Californians say air pollution is a very serious (21%) or somewhat serious (42%) threat to their health and that of their immediate family. While at least half of Californians across regions and demographic groups see air pollution as a serious health threat, African Americans and Latinos are about twice as likely as Asian Americans and whites to express this view.

Just over half of Californians (55%) believe air pollution is a more serious health threat in lower-income areas than other parts of the state—with 66% of Latinos and 64% of African Americans and Asian Americans affirming this view compared to 42% of whites. On a similar question about pollution of drinking water, 70% of Californians say the threat is more serious in lower-income areas; this view is most prevalent among Latinos (76%) followed by Asian Americans (73%), African Americans (69%), and whites (63%). 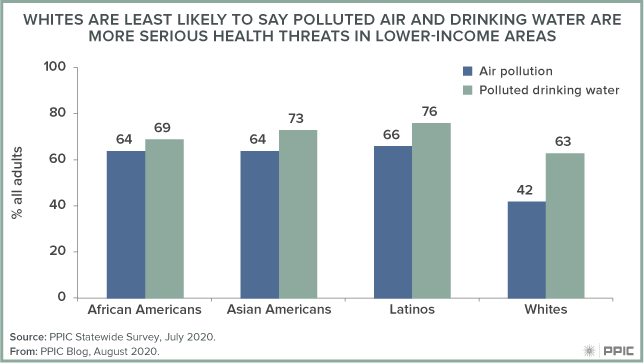 In one effort to address environmental disparities, the state implemented the cap-and-trade program as part of a strategy to help California meet emissions-reduction goals cost effectively. Some revenues from the program are then spent on projects such as affordable housing near public transit and energy efficiency.

Majorities favor cap and trade, with Latinos (86%), African Americans (83%), and Asian Americans (78%) more likely than whites (69%) to say it is important to direct funds to improving environmental conditions in lower-income and disadvantaged communities. As of 2016, 25% of funds must be spent on projects in disadvantaged communities and at least an additional 10% is for low-income communities. However, revenues from the program’s latest auction are down, leaving less money for these programs. 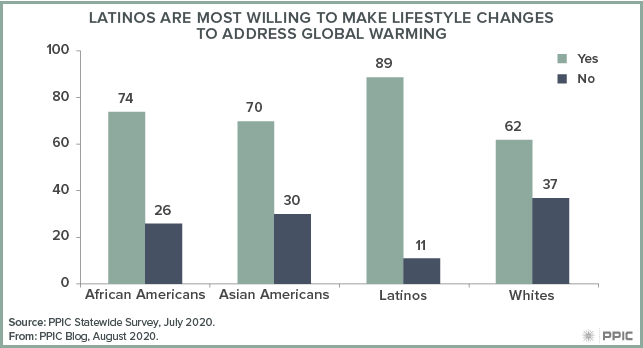 As residents of California grapple with old and new inequities exposed by the climate crisis and COVID-19, PPIC will continue to gauge Californians’ perspectives on environmental justice.