Populations at California county jails are rebounding, which may present challenges for counties trying to manage COVID-19 and protect nearby communities. Jail-borne infections potentially can spread to local communities because most admitted inmates are released within a few days—long enough to contract COVID-19 without knowing it. Recent data suggests that more inmates test positive for COVID-19 as jails get closer to capacity.

In June, public health experts recommended reducing the prison population to 50% capacity to help address the COVID-19 outbreak at San Quentin. Jails in California could also adopt this recommendation to minimize outbreaks. Jail populations have already proven quite malleable—earlier in the pandemic 27 counties reduced their jail populations below 50% capacity. Only five remained over 75% capacity.

Yet whether lowering jail population levels might reduce COVID-19 infections remains an open question because the data needed to answer it have only recently become available. Every week since April, the Board of State and Community Corrections (BSCC) has published the average daily jail population for each county. More recently, the BSCC also began collecting COVID-19 testing data.

The 35 counties shown on the map below tested and reported for at least half of the ten weeks between late July and late September. At most, each of these counties reported between 0 and 81 positive tests weekly during this period. Determining exactly how many inmates tested positive is not always possible because the BSCC truncates measures with counts under 11. Also, some counties reported one count for all jails, whereas others reported counts for each jail. 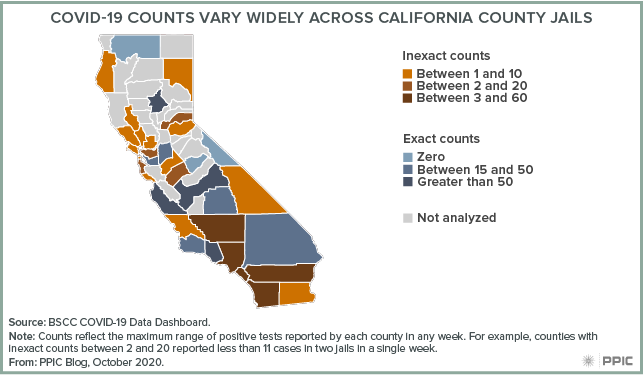 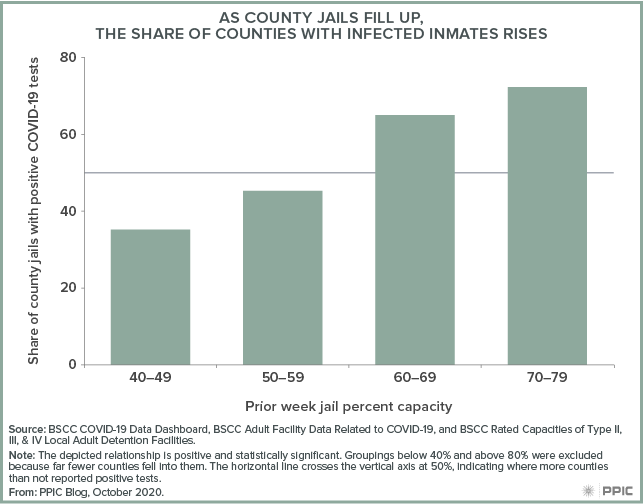 As California moves through new seasons in the pandemic, managing the health of jail populations may again dominate policy discussions. New BSCC data suggest a consistently positive and statistically significant relationship between how crowded jails are and whether counties detect COVID-19 among inmates. That is, as jails get closer to capacity, more counties find COVID-19 among inmates. Although some admissions and detentions are unavoidable, counties should consider the relationship between crowding and infection as they manage jail populations to protect public health and public safety.