Testimony: Transfer Is Key to Closing the Workforce Skills Gap

Hans Johnson March 20, 2018
NEVER MISS AN UPDATE!
Sign up for our blog alerts to receive insights from PPIC by email.

California faces a shortage of highly educated workers. Specifically, economic projections to 2030 show that about two in five jobs will require at least a bachelor’s degree, while demographic projections suggest that only about one in three Californians will attain this level of education. This shortfall equates to 1.1 million workers. To close the gap, all higher education systems will need to play a role, increasing access, transfer, and completion. Improving access and outcomes among groups historically underrepresented in higher education—including low-income students, first-generation college students, Latinos, and African Americans—is essential if we are to close the workforce skills gap.

The good news is that California’s students are rising to the challenge. College preparation among high school graduates has increased, with the share of students completing the college preparatory requirements of UC and CSU now at an all-time high. Strong demand for UC and CSU is likely to continue as college preparation improves and the transfer pathway becomes more efficient and effective. In addition, new initiatives, including reforms in remedial education at the community colleges and CSU, have the potential to substantially improve student success rates and boost transfer. Finding ways to accommodate all these students remains a central challenge, but one that must be met in order to ensure a better future for all Californians.

PPIC has identified ambitious targets that would close the workforce skills gap. As shown in the table below, doing so will require large increases in access to UC and CSU, both for first time freshmen and for transfer students. In its Vision for Success, a blueprint for improving student outcomes, the community colleges have established new goals for transfer that align exactly with the PPIC targets. Those targets include a 35% increase in the number of transfer students at UC and CSU, increasing from about 72,000 combined in 2015 to almost 100,000 by 2020.

I’m pleased to say that the colleges are currently on track to meet those targets. We are now two years into PPIC’s projections, and both UC and CSU have met the closing-the-gap targets (see charts below). The concerted efforts of policymakers, higher education officials—including staff and faculty—and, of course, students have led to these early gains.  State general fund allocations for each system have increased since the Great Recession, allowing for increased enrollment. At UC, those budget allocations were partially tied to increasing enrollment, hence the sharp rise in transfers from 2015 to 2016.  New articulation agreements, such as the Associate Degree for Transfer (ADT), have streamlined the pathway from community colleges to four-year colleges, especially CSU. And an increased focus on improving student outcomes in the community colleges has led to multiple substantive reforms designed to increase persistence and completion (including transfer). 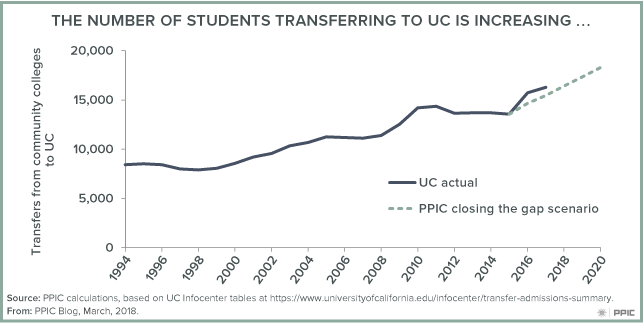 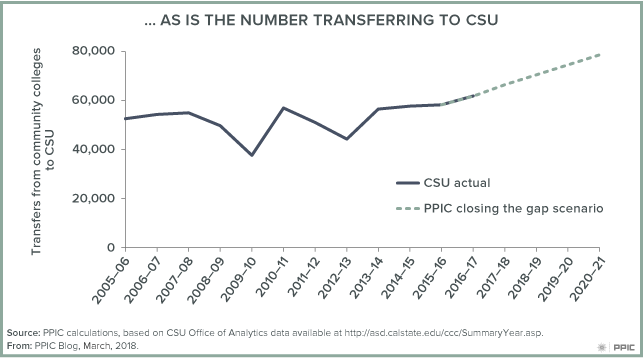 These early successes are very promising. Still, California needs to build on them if it is to close the degree gap.  We offer the following recommendations for moving forward: 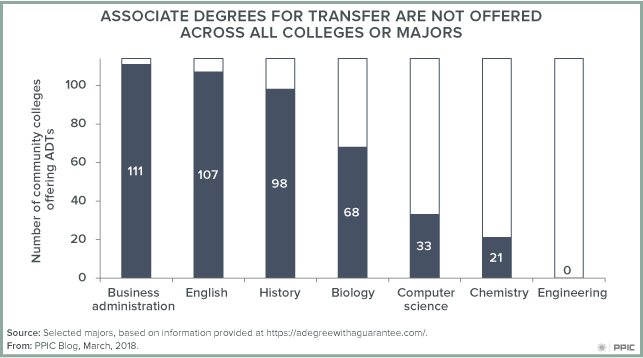 Through thoughtful planning—and yes, additional funding—closing the workforce skills gap is possible. Improving the transfer pathway is a necessary and critical component. And because community colleges are highly representative of California’s economic and demographic diversity, improving transfer pathways will ensure that more low-income, first-generation, and underrepresented students have access to a four-year degree.