Justin Goss, Niu Gao July 11, 2018
NEVER MISS AN UPDATE!
Sign up for our blog alerts to receive insights from PPIC by email.

As the Federal Communications Commission’s (FCC) repeal of net neutrality phases in, concerns that Internet service providers (ISPs) could speed up or slow down traffic from certain websites or prioritize certain content loom large. Changes to Internet service, if any, will probably be slow and gradual; however, the repeal has potentially important implications for the digital divide in and outside of California’s schools.

K‒12 schools rely increasingly on online content and management systems to deliver instruction (e.g., blended learning), administer standardized tests (e.g., Smarter Balanced assessments), and manage educational data (e.g., cloud computing). As online learning becomes ubiquitous, access to high-speed Internet is no longer optional—it’s a necessity. Most schools receive discounted Internet services through the federal E-rate program, but if providers decide to introduce tiered pricing based on content, students and educators could lose access to quality education programs. Tiered pricing could also exacerbate the digital divide between urban and rural districts. PPIC research shows that close to 70% of rural districts lack sufficient bandwidth for digital learning, compared to 18% of urban districts. If this gap persists or widens, students in rural areas may be left behind in the digital race.

Another concern is the homework gap. The FCC reports that 70% of teachers assign homework that requires access to broadband, while an estimated 860,000 (22%) households with school-age children in California do not have home Internet service. For many of these households, the cost is too high. Low-income families may get government subsidies (e.g., the Lifeline program) or discounts from ISPs. However, if providers create a fast lane for customers who pay premiums and a slow lane for those who don’t, the homework gap may widen. Rural residents may be particularly affected by these changes, because they tend to have more limited Internet access and fewer ISPs. 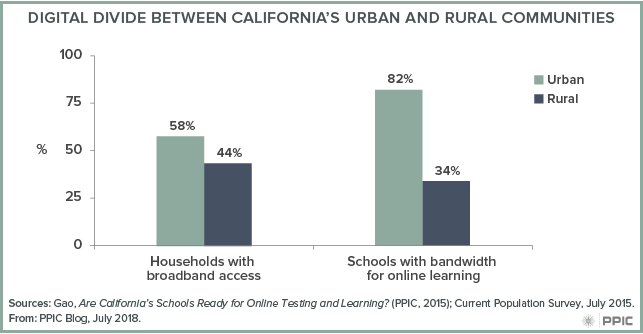 Federal and state policymakers have placed net neutrality near the top of their agendas. A major legislative effort to restore net neutrality fell short in the US House of Representatives. In California, two Senate bills (SB 822 and SB 460) that would establish a stringent net neutrality regime are being considered in the state legislature. Other states, including Montana, New York, and Oregon, are taking similar legislative or executive action