Why Is It Taking So Long to Restore the Sediment-Choked Elk River?

This is part of a series on smarter environmental permitting.

The Elk River is the largest tributary to Humboldt Bay and provides habitat for three runs of salmon and steelhead. But after this timber-rich watershed was heavily logged more than 20 years ago, major storms washed soils from clear-cuts into the river, causing ecological devastation, local flooding, and contamination of local drinking water supplies. We talked to Darren Mierau of CalTrout about the Elk River Recovery Program and the big challenges facing this effort. 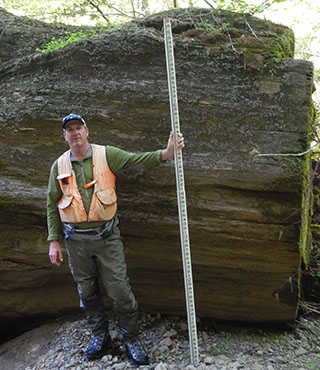 PPIC: What happened to this watershed, and what is the project seeking to restore?

DARREN MIERAU: The Elk River became a focus of conflict after a local logging company was acquired in a hostile takeover by an out-of-state company. This company, Maxxam, moved the watershed from sustainable logging to a very aggressive and ultimately destructive approach. The damage they caused created ecological degradation and social strife that persists to this day. Then several big storms hit in the 1988‒2000 period when Maxxam was cutting a lot of trees. Sediment came down in massive quantities into the river. This watershed’s geology is very erosive, and the river is very low gradient—it doesn’t have enough stream power in its middle stretch to push sediment out to sea, so it stayed where it was deposited. This changed the ecosystem in a number of ways. Vegetation started growing in the sediment deposits, which allowed more sediment to accumulate, so the problem got worse and worse.

In 1998 the Regional Water Board listed the Elk River as an impaired watershed, because the sediment violated Clean Water Act allowances. This set the stage for restoration. With this level of impairment, it’s not going to get better on its own.

A much more responsible company now owns the land. It uses better logging practices and collaborates with scientists to study the problem and try to figure out how to fix the large-scale degradation of this landscape. Sediment smothered habitat for endangered salmon and other wildlife. It harmed drinking water quality for local residents, and made their lands, roads, and homes more susceptible to flooding.

Our program is seeking to restore beneficial uses protected by the Clean Water Act and improve the lives of the people who live there. The sediment and water quality problems require addressing the upper watershed and legacy sediments in the channels, as well as increasing capacity of the channel to handle high flows and reduce flooding.

And while the river still sustains coho and steelhead, these populations are at just 5‒10% of their historical abundance. Much of their rearing habitat is full of sediment and needs restoring. There’s also a lot of opportunity to improve habitat where the river joins Humboldt Bay. Restoring a marsh ecosystem not only helps salmon, it can lessen the impacts of sea-level rise.

In addition to all the sedimentation issues, ranching has damaged some riparian habitat along the lower river reaches. We’re proposing to expand and restore this habitat where feasible. Many ranchers see the benefits of this.

PPIC: How does the Elk River restoration exemplify problems with the restoration permitting process?

DM: The main obstacle is there are so many agencies involved, each with unique and sometimes conflicting permit requirements and different recovery goals. We’re obligated to obtain about a dozen different permits—everything from a local ordinance protecting streams, to US Army Corps of Engineers regulations on stream channels, to requirements of the various agencies overseeing endangered species. Each has a cost to it, which taken together can be quite high.

Here’s an example of the balancing act our project is negotiating. Willows are growing in sediment deposits in the river channel, causing more sediment buildup. But the willows now provide bird habitat, so we’re being asked to mitigate removal of that vegetation by expanding riparian habitat elsewhere. The only place to do this is on private lands—local folks have to give up some of their property that was damaged by the logging to create mitigation habitat. Mitigation may require 2-to-1 or higher replacement habitat. It’s a big challenge to find two times as much habitat as the instream willows provide.

DM: The big surprise to me in the permitting process is that the agencies don’t work together as much as we wish they would to collaborate on solutions—particularly where their responsibilities overlap. They’re often under-resourced and don’t have enough capacity to fully engage in every recovery effort. We try to help them identify where they have common ground as a way to reduce regulatory burdens on restoration. I think we need to get to a place where such collaboration is an integral part of the process and doesn’t have to be initiated by project proponents.

We also need better perspective on what we’re collectively trying to achieve in the watershed—identifying the right balance between short-term impacts in exchange for meeting broader recovery goals.

Smoothing the Bumps in the Road to Ecosystem Restoration