Last week Los Angeles district leaders reached a deal with public school teachers to end the city’s first teachers’ strike in 30 years, agreeing to higher teacher salaries, smaller class sizes, and more support staff. The strike was the culmination of long-brewing tensions over the amount and allocation of funds in California’s largest school district. Many other districts in the state are facing similar challenges, as the demand for resources grows faster than the available dollars.

Earlier this month, the governor’s first budget proposal acknowledged some of these broader difficulties. The 2019–20 spending plan proposes $3 billion in one-time payment to CalSTRS, the main teachers’ retirement system, on behalf of schools (separate from the General Fund K–12 spending determined by Proposition 98). The proposal also includes $1.1 billion to pay down a portion of the state’s share of the estimated CalSTRS liability.

The proposed $3 billion CalSTRS payment could take some financial pressure off school districts. Funding for schools is determined by two main formulas. First, total statewide funding is determined by applying a formula (Proposition 98) to the expected revenue from state and local property taxes. Then, another formula (the Local Control Funding Formula) is used to determine the bulk of the dollars available to individual school districts.

Distributing resources in this manner means local school districts, even one as large as Los Angeles, have limited control over the total amount of dollars they have to work with. But the demand for those dollars is constantly going up as districts find themselves paying more—overall and in particular areas such as special education services, health care premiums, and pensions. Pensions are especially challenging, as legislation passed in 2014 mandated that school districts’ share of teacher pension contributions would rise from 8% (2013) of their teacher payrolls to 19% by 2020. This increase will drive annual pension contributions to more than $1,000 per student in most local school districts.

How much relief might the governor’s proposed payment provide? The answer is some, but not much. The governor’s budget document states that the payment “will reduce the out-year contribution rate by half a percentage point.” Given that number, the expected relief amounts to an annual savings of around $25 per student. In large districts such as Los Angeles, this adds up to tens of millions of dollars annually, but districts with lower enrollment numbers will see more modest financial gains. 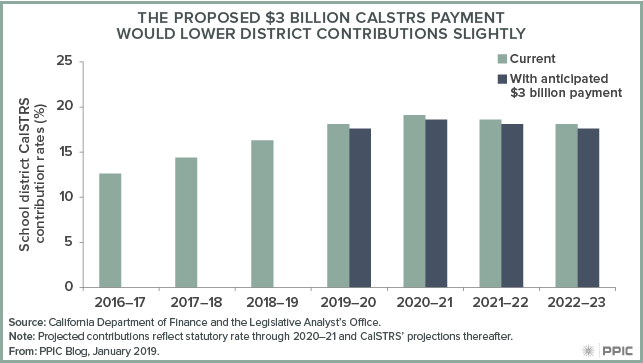 The CalSTRS payment proposal is a departure from prior state budgets. First, it represents an acknowledgment that, despite recent increases in total education spending, school districts still face fiscal challenges. Second, it proposes to direct non–Proposition 98 funds, making it a de facto increase in total K–12 resources. School district administrators are likely to appreciate both. However, the proposal still needs the legislature’s approval, and it’s not clear whether it would significantly relieve fiscal pressures on districts.

Whether the one-time CalSTRS payment represents a shift in future policy remains to be seen. If it is in fact only a one-time payment, the impact on the resources available to schools will be welcome but modest. It may, however, signal a different approach to education funding in the long run—something that would be worth watching.