This post is part of a series examining challenges involved in the 2020 Census and what’s at stake for California. Click here to see our full coverage.

Described as the largest peacetime operation undertaken by the federal government, the census is used for everything from allocating congressional seats to redrawing voting districts to distributing billions of dollars in federal funding. Many Californians are at risk of being undercounted, and an inaccurate count could have far-reaching implications.

Following decades of escalating costs, the Census Bureau has made significant changes to modernize the census, in hopes of keeping costs similar to what they were in 2010 ($92 per household). For the first time, most households will be invited to respond online, and newly developed tools will help manage field operations. These changes should reduce the staffing levels and infrastructure necessary to conduct the census. 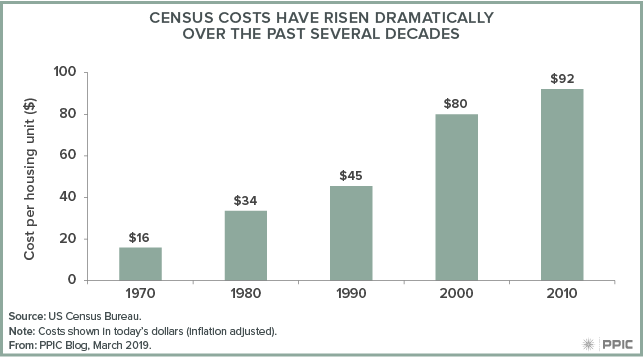 But new approaches also create new risks. The US Government Accountability Office has designated the 2020 Census at high risk of failure, citing capacity and planning issues and the fact that the testing of new systems has been scaled back. Several field tests were cancelled in 2017, and the full end-to-end test, which is designed to approximate actual census operations, took place in only one location rather than three, as originally planned. Recently, the NAACP released documents suggesting that chronic underfunding and understaffing at the Census Bureau have negatively affected census preparations.

As of December 2018, the Census Bureau had identified almost 1,100 security weaknesses in its IT systems that still needed to be addressed. Possible threats include disruptions to the website platform, malware from respondents’ personal devices, and impersonation of the Census Bureau. The bureau maintains that it is fully vetting new processes—including working with industry and the Department of Homeland Security to identify and protect against IT threats.

Another big uncertainty concerns the federal administration’s plans to add a citizenship question. Several lawsuits have challenged this decision, and the Supreme Court is scheduled to make a ruling by the end of June on whether the question can be included. Regardless of the ruling, census responses are confidential and, under federal law, the Census Bureau cannot share any personally identifiable information, even with other government agencies. However, combined with federal government rhetoric and actions around deportation, a citizenship question may lower response rates among California’s 10 million immigrants, especially households with undocumented members.

Last year’s end-to-end test did not include a citizenship question. But this July, the Census Bureau will conduct a nationally representative test that should shed light on the question’s potential impact on response rates. Results will help shape the bureau’s outreach strategy and determine if more census workers are needed to follow up with households that don’t respond.

In the meantime, what can California do to ensure an accurate count next year? The state has already invested more in census outreach than any other: $100 million for 2018–19, with an additional $54 million proposed for 2019–20. State and local governments and organizations all have a role to play. Building awareness about the role of the census in determining funding for local public services will go a long way toward motivating Californians to respond, as will assuring residents that their data will be safe and secure.

To discuss what’s needed as California prepares for the 2020 Census, PPIC will be hosting an event on Monday, March 25 in Sacramento with Secretary of State Alex Padilla and other distinguished leaders and experts. Those who cannot attend in person are welcome to join the live webcast, or visit our website later to watch a video of the event.