California’s K–12 districts and schools are responsible for preparing students for college and career. But until recently, data has not been available to determine their success in actually getting students to apply to and attend college. Now, however, the California Department of Education has published data on college enrollment among recent high school graduates, using information from the National Student Clearinghouse. Initial findings show wide disparities in college enrollment across racial/ethnic groups and throughout the state’s regions—including within school districts themselves.

According to the data, about 65% of California’s high school graduates attended college within a year of graduation in 2017–2018 (the most recent data available). But there are wide differences. For instance, Latino students—the majority of K–12 students—have a relatively low rate of college enrollment (58%), while rates for Asian American students (84%) are quite high. Asian American students are also much more likely to attend a University of California campus than other students. African-American students have a similar enrollment pattern as Latino students, except many more opt to go to college in another state. White and multi-racial students also enroll in out-of-state colleges or universities at rates above the state average. 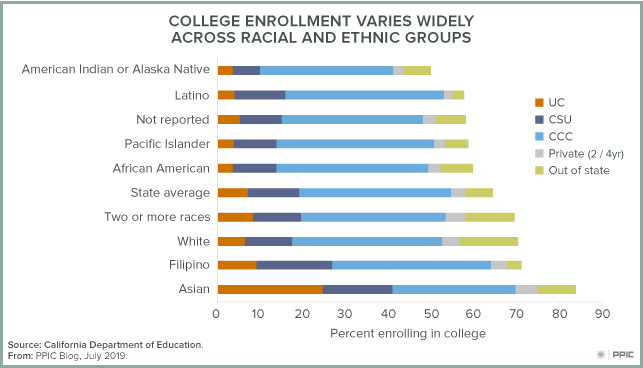 Differences by school, district, and region are also available in the data (you can check your local district’s college enrollment rates here). Fresno provides a good example. Fresno County has higher college enrollment rates than the state, but students are much less likely to attend a UC and much more likely to attend a CSU or community college—perhaps because of the strong presence of Fresno State and local community colleges, as well as the greater distance to most UC campuses. 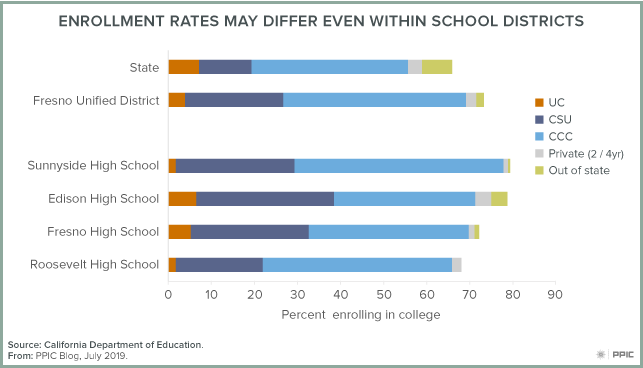 Among the many districts in Fresno County, students from Fresno Unified School District are relatively more likely than others to attend college. But there is plenty of variation within the district. Sunnyside High has very high enrollment rates; however, rates are lower than the district average for UC and much higher for community college. By contrast, Edison High has much higher than district average enrollment at UC, private, and out-of-state schools.

Enrolling in college or university is a goal for many high school students. But because the existing K–12 and higher education data systems are not linked in California, this is the first time in over a decade that the state has good information about whether high school students are meeting that goal. With the passage of SB75, California has begun the process of building a statewide longitudinal data system that will connect the existing student data systems between K–12 and higher education. The new enrollment data provide the first glimpse of the promise of a connected education data system. Linking data across segments could yield useful new information—such as whether students were successful in their college courses—which would fit nicely in the state’s dashboard on college readiness.