A Snapshot of Homelessness in California

In late January communities around the country conducted a point-in-time count of their homeless populations. Federally mandated by the US Department of Housing and Urban Development, these estimates help local, state, and federal governments allocate resources and track progress toward the goal of ending homelessness.

Last year’s count revealed that about 130,000 Californians were homeless—nearly a quarter of the national total. California’s rate of homelessness, 33 per 10,000 residents, was among the highest in the country.

After rising 14% from 2016 to 2017, the total number of homeless Californians declined slightly (by 1%) from 2017 to 2018. Homelessness decreased in many of California’s major urban areas, including in four of the five counties with the largest homeless populations: Los Angeles, San Diego, Santa Clara, and Alameda.

However, even with these decreases homelessness remains a huge problem. Los Angeles County alone recorded nearly 50,000 homeless people. The other nine counties with the largest homeless populations reported between 2,300 and 8,600 people experiencing homelessness. And many areas across the state saw increases in the number of homeless people. 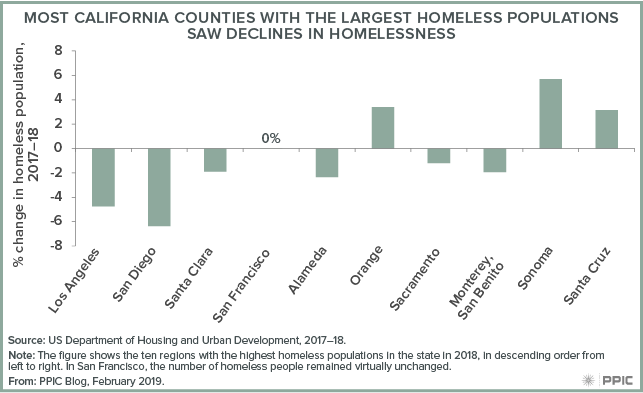 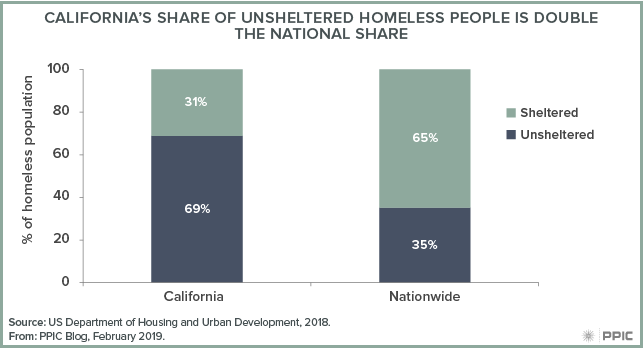 Homelessness is already on many policymakers’ radar. Governor Newsom’s proposed budget would allocate $500 million in one-time grant funding for emergency homeless shelters and navigation centers, and $25 million ongoing to assist eligible homeless individuals in applying for disability benefits. Localities are also trying a range of approaches to expand affordable housing and increase services for the homeless. For example, voters in Los Angeles, Berkeley, Santa Rosa, and Emeryville recently passed local bonds to fund housing projects and assistance for low- and middle-income households and people experiencing homelessness. Coordinating investments, policies, and programs across federal, state, and local levels will be key to reducing homelessness throughout the state.

Californians Are Grappling with Homelessness