Radhika Mehlotra, Bonnie Brooks September 3, 2020
NEVER MISS AN UPDATE!
Sign up for our blog alerts to receive insights from PPIC by email.

Earlier this summer, the state legislature voted to place Proposition 16 on the November ballot. If passed, Proposition 16 would repeal a nearly 25-year-old ban on affirmative action (Proposition 209). Since 1996, Proposition 209 has prohibited California’s public higher education institutions from considering race, sex, or ethnicity in admissions.

The debate on affirmative action is controversial: proponents argue that it is needed to address racial inequalities and ensure a racially/ethnically representative student body, and opponents maintain that it is discriminatory and anti-meritocratic.

The larger issue of improving college-going among California’s increasingly diverse communities is critical to the well-being of residents and the state’s economic future.

PPIC’s research has shown that access to college is uneven and the state faces a looming workforce skills gap—that is, the economy of the future will demand far more college-educated workers than will be available. Because of the state’s changing demographics, addressing this gap must include improving access and completion among groups underrepresented in higher education today, including low-income students and African Americans, Latinos, and Native Americans. Narrowing equity gaps and expanding access to higher education would also offer opportunities for underrepresented students to climb the economic ladder.

How well are California’s institutions of higher education doing in this regard? In the California State University system, the student body largely reflects the diversity of the state’s high school graduates.

At the University of California, the picture is different. For example, while Latino students make up the highest share of high school graduates (51%), they make up a smaller share of UC applicants (38%) and admitted students (34%). Meanwhile, Asian students comprise 13% of high school graduates but 31% of UC applicants and the highest share of admitted students (36%). These disparities are particularly large at UC’s flagship campuses, such as Berkeley and UCLA.

Improving college preparation is a key step toward addressing these gaps. Today, there are substantial differences in the share of high school students completing the college preparatory courses required—but not sufficient—for UC admission. (UC also considers grades in those courses). 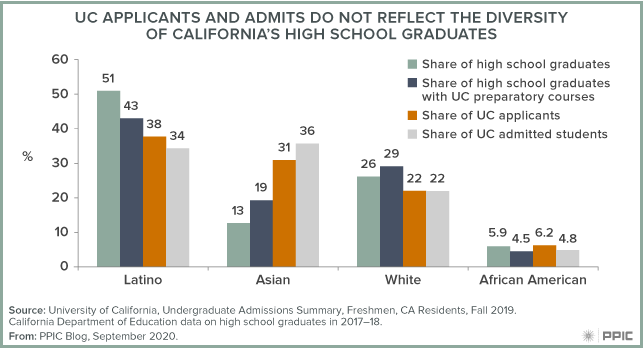 California’s K–12 system is working toward improving college readiness. The state has provided more funding to schools serving low-income students and accountability standards now include measures of college and career readiness. Many districts now require completion of the UC and CSU college preparatory courses in order to graduate. Statewide, the share of students completing those courses has grown substantially.

UC is also implementing changes in an attempt to broaden access. It has removed standardized testing and changed some eligibility requirements (expanding the types of high school science courses that meet entrance requirements). However, under current law it cannot take into account a student’s race or ethnicity in the admissions process.

PPIC will continue to monitor this topic and examine the critical role that higher education plays in expanding opportunity for state residents.