Better Days for California’s Labor Market, but Will They Last?

Signs point to an accelerating recovery in California, with lower unemployment and a rise in the labor force. In fact, California has seen the hardest hit sectors recover jobs faster than the nation between September and October. Despite these improvements, millions of workers are still un- and underemployed—and without new actions by policymakers, unemployment benefits for many will expire before the end of the year.

In October, California employers added jobs at a pace not seen since June, faster than the US overall. Jobs grew by 0.9% between September and October, and California has now recovered 44% of jobs lost early in the pandemic. By comparison, employment in the US grew at 0.5%.

After stagnating through summer, sectors hit hardest by the pandemic led the way for California job growth, growing by 4%. But employment is still 24% below February levels, which underscores a sizeable gap that may take many months to shrink. In less affected sectors, growth was slower and remains at 5%–6% below February levels. 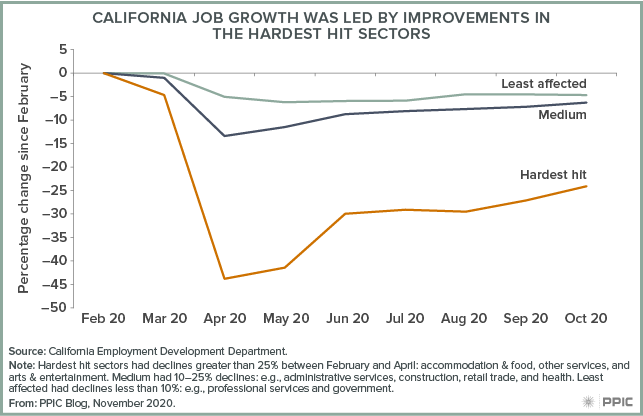 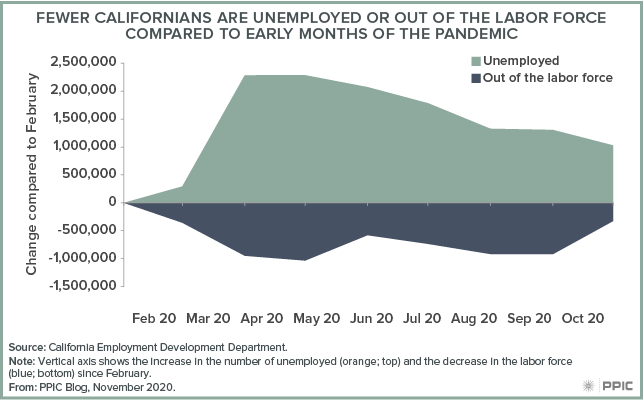 Furthermore, lower unemployment sometimes reflects workers leaving the labor force—but the opposite happened in October, when the number of people out of the labor force fell by 600,000. Not all of these returning workers were full-time, however, even if that was their preference: about 16% were unemployed or underemployed, much higher than the official rate of unemployment.

Although labor market conditions are moving in the right direction, the strain of the pandemic still shows. Over 1.7 million Californians remain unemployed, compared to 750,000 in February before the pandemic. Unemployment rates remain substantially higher in Los Angeles and Imperial counties compared to other regions (12.2% and 18.8%), reflecting regional challenges around economic and demographic makeup and experience with COVID-19. Unemployment insurance bridged gaps in income—injecting $110 billion in support between March and early November—but many distressed workers have been unemployed for longer than 26 weeks, the period unemployment insurance typically covers.

The federal CARES Act provided extended benefits to over one million workers during the week that ended October 17. Federal support is set to end this coming December and then in May 2021, when several programs for long-term unemployment expire. In addition, the federal program that expanded unemployment compensation for workers not eligible for traditional insurance is also expiring in December. Altogether an estimated 750,000 Californians will lose unemployment benefits by the end of the year.

COVID-19 spikes during November and a return to restricted activities could jeopardize the prospects for further accelerating a recovery. Without federal action, state policymakers will have few options that compare to the vast support achieved through the CARES Act. It is therefore critical that federal policymakers come to an agreement on continued stimulus and support.

Glimmers of Hope for California in the April Jobs Report?