In the course of the pandemic-induced economic downturn, large numbers of California households have not had enough to eat. Consequently, CalFresh, the state’s largest nutrition safety net program for low-income Californians, has seen a substantial rise in caseloads. Even so, over 800,000 California households recently report not only a lack of food but also a lack of connection to the nutrition safety net.

When the pandemic began to affect the state, the CalFresh program responded quickly. Overall, program enrollment rose from 4.1 million Californians in February to a height of 4.8 million in June before declining slightly to 4.6 million in August. Most counties saw increases. Those with the largest percentage growth were Mono, Amador, and San Mateo (41% to 63%), while Modoc, Tulare, and Alpine Counties saw declines by August (-1% to -7%).

The recent increase in caseloads across much of the state paints a grim picture of economic hardship, but it also means that more low-income families are getting much-needed assistance in a time of increased need. This is particularly important for California, where just 71% of eligible Californians actually participated in the program, according to the most recent estimates from the US Department of Agriculture. The participation rate puts California in the bottom six states in terms of reaching those in need.

And despite the considerable uptick in CalFresh participation, many Californians still do not have enough to eat. A total of 1.2 million households—about one in 7 households with children (600,000), and one in 11 households without children (also 600,000)—report lacking sufficient food “in the past week,” according to late August and early September data from the Census Household Pulse survey. Food insufficiency was higher among households with at least one member losing a job since March 2020 (18%). 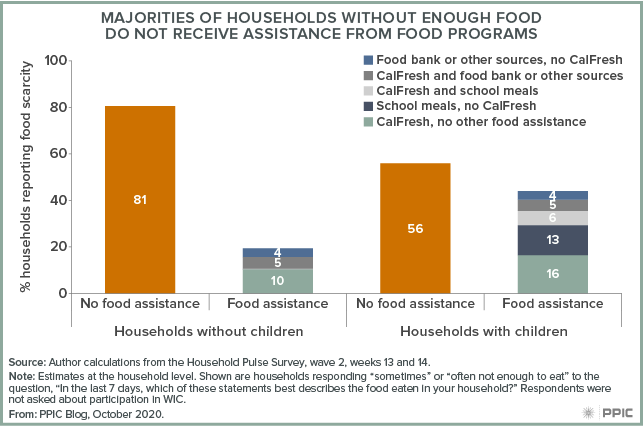 Even among households that do receive nutrition assistance, there appears to be insufficient coordination among programs. For example, 16% of households with children rely on CalFresh and 13% rely on school meals. But only 6 percent say they rely on both.

Clearly, there is substantial unmet need. Building on the state’s efforts to improve CalFresh participation rates and continuing to lower barriers to participation by further integrating eligibility across programs could make a significant difference, including in times of increased economic insecurity.