In the midst of a global pandemic and recession, Californians have a dim economic outlook. Two in three Californians are expecting bad economic times over the next 12 months, and six in ten expect long periods of widespread unemployment or depression over the next five years. Looking even further into the future, a solid majority of Californians think that when today’s children grow up they will be worse off financially than their parents.

This pessimism mirrors the severity of the current economic crisis. Our December PPIC Statewide Survey finds that four in ten Californians report having their work hours or pay reduced, one in four say they have cut back on food, and one in five say they have been unable to pay a monthly bill.

And while many have been affected, Californians in families making less than $40,000—about one in five households—are bearing the brunt of the fallout. Forty-three percent of lower-income Californians have had work hours or pay reduced, compared to 36% of those with income of $80,000 or more. Lower-income Californians are also substantially more likely to have cut back on meals or missed a monthly bill. 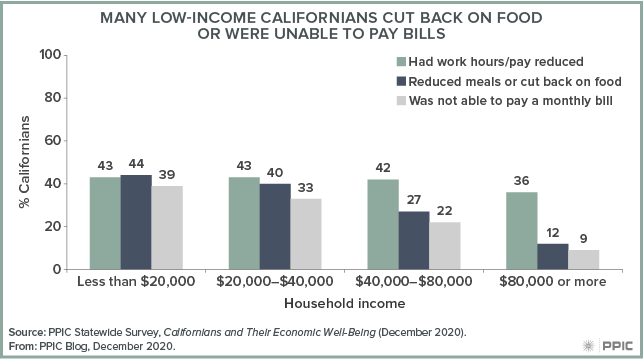 Focusing on households making less than $40,000, we see different experiences across the state’s regions. About half of low-income adults in the Inland Empire (53%), Los Angeles County (50%), and Orange/San Diego Counties (47%) have had their work hours or pay reduced, while about a third in the Central Valley have experienced this.

When it comes to food scarcity, nearly half of low-income adults in the Inland Empire (48%) and the San Francisco Bay Area (47%) report cutting back on food, compared to four in ten elsewhere. And residents of Los Angeles County (40%) are the most likely to have missed a monthly bill, while those in Orange/San Diego Counties (28%) and the San Francisco Bay Area (29%) are the least likely to have done so. 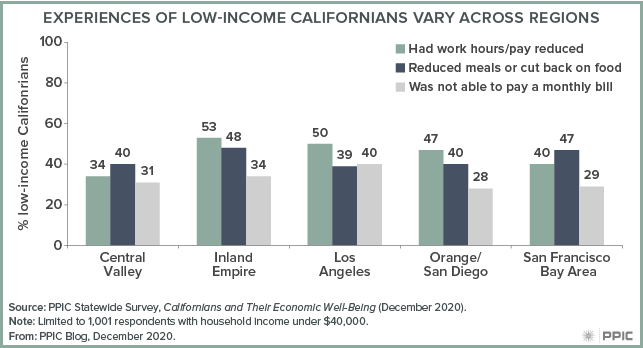 Other factors like educational attainment or having kids in the household also play a role in the experiences of low-income residents.

Parents have been especially hard hit, with more than half of low-income parents who have kids 18 or under saying they have had work hours or pay reduced, have cut back on food, or have missed a monthly bill—compared to fewer than four in ten in other households. 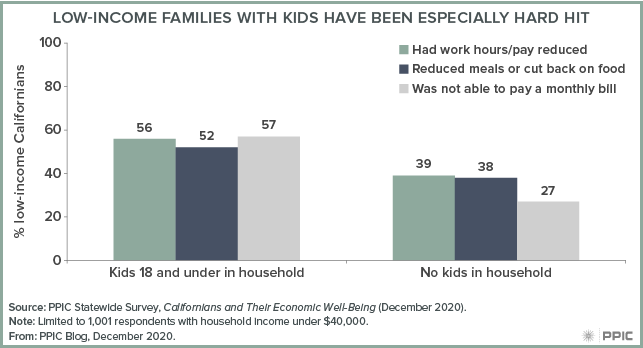 A better understanding of how different low-income communities have been affected can help inform the design and implementation of policies that foster an equitable recovery. After a year of unprecedented calamity, it’s clear that many Californians are grappling with the effects of the economic crisis—and that these effects may linger for some time. PPIC will continue to closely track how the pandemic and recession are affecting Californians’ well-being as we move into the new year.