Alyssa Dykman, Alvar Escriva-Bou September 23, 2019
NEVER MISS AN UPDATE!
Sign up for our blog alerts to receive insights from PPIC by email.

Today, world leaders converge in New York City for the United Nations Climate Action Summit. The summit comes at a time when the federal government is moving in a different direction than California in the area of climate change and energy policy. Just last week, the Trump administration announced it would rescind the state’s authority to set its own vehicle emission standards—a decision challenged on Friday in a lawsuit filed by California and 22 other states.

Over the past two decades, California has taken a multifaceted approach to reduce greenhouse gas (GHG) emissions, and Californians have consistently shown strong support for the state’s recent actions.

To reduce emissions from the transportation sector—the largest emitter, with 41% of the state’s GHG emissions in 2017—California expanded its vehicle pollution standards to cover smog-forming pollutants and GHG emissions. Other policies include low-carbon fuel standards, a major effort to ramp up electric vehicles, and integrating land-use and transportation investments.

California has also committed to decarbonizing the electricity sector. In 2018, then-governor Jerry Brown issued an executive order that calls for California to provide 100% of its electricity from renewable and carbon-free sources by 2045, and at least 60% by 2030. The state is on its way to meeting this goal, with about a third of electricity provided by renewable sources in 2017.

California was also the first state to enact a cap-and-trade program to reduce GHG emissions, which allows businesses to trade emissions permits. This program now covers 85% of the state’s GHG emissions.

New policies that target the reduction of carbon, methane, and other harmful GHGs are underway. Since carbon dioxide can be removed from the atmosphere by plants and stored in vegetation, soils, and the ocean, the state is developing a strategy to use integrated land-use approaches. These approaches will produce the environmental and economic benefits that traditionally come from natural and working lands, while offering potential carbon storage.

Californians have consistently expressed support for strong climate change policies. A recent PPIC Statewide Survey found 71% of California adults are in favor of the state’s 100% renewable energy goal, including more than six in ten across regions and demographic groups. Two in three residents are in favor of the state law (Senate Bill 32) that requires California to reduce its GHG emissions to 40% below 1990 levels by 2030. Overwhelming majorities of Californians are also in favor of requiring automakers to further reduce greenhouse gas emissions from new cars. 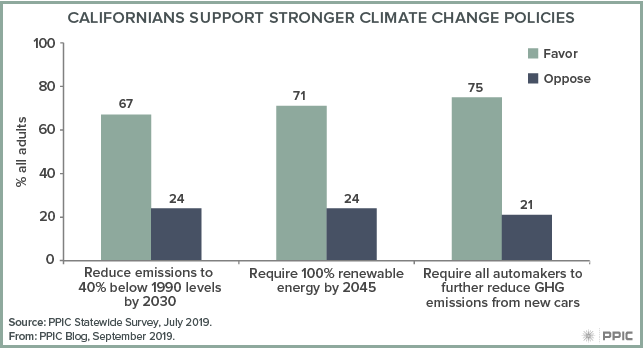 This support will be critical in the state’s ongoing efforts to reduce emissions. In addition, adapting to the new realities brought on by climate change will be essential. Despite California’s goals and policies, some of the effects of a changing climate are already underway—and would persist even if all global emissions ended today. PPIC will continue to track California’s climate change policies and proposals, as well as residents’ opinions about this important issue.