California is grappling with drought again, facing many of the same conditions and challenges that were features of the 2012–16 drought—including stressed ecosystems, depleted reservoirs, hard-hit farms and rural communities, threats to urban water supplies, and the potential for extensive wildfires. Knowing what’s different and what’s similar to our last major drought can help us better prepare the most vulnerable sectors for ongoing dry times.

To put this drought in context, this is only its second year. Historically, droughts have lasted up to six years. Our most recent one lasted five. We cannot know if this drought will break next year or four years from now, but we should plan for continuing drought.

The past two years were comparable to the worst of the 2012–16 drought in two key ways (Figure 1). First, April 2019 to March 2021—a period including the past two rainy seasons—was the fourth driest two-year period on record. Second, while not quite as warm as the last drought, these two years are among the warmest. The combination of low precipitation and high temperatures made the last drought very intense. The same pattern is unfolding again. 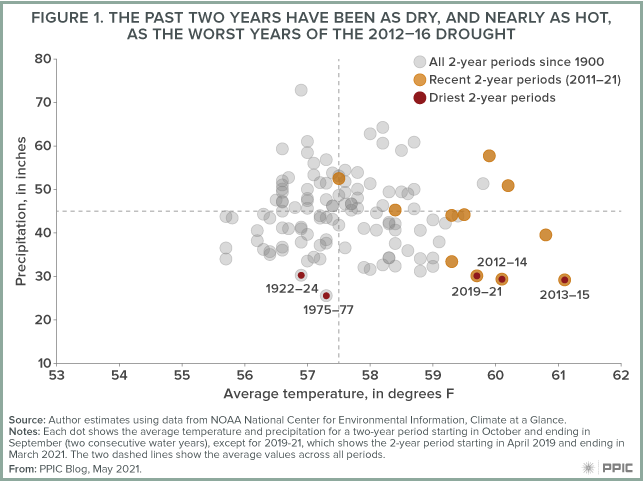 But there are also some important differences that will affect options for drought management. Most striking are strong regional differences in drought intensity, as shown in Figure 2.

Although Southern California is also dry, this drought has hit the normally water-rich portions of the state particularly hard. So far, the North Coast and Sacramento River watersheds have been the epicenter of dryness and high temperatures, in contrast to the central and southern focus of the 2012–16 drought. This is driving a supply crisis to farmers in the Klamath basin, and acute water shortages in the Russian River watershed, the area targeted by Governor Newsom’s Regional Drought Emergency Declaration. 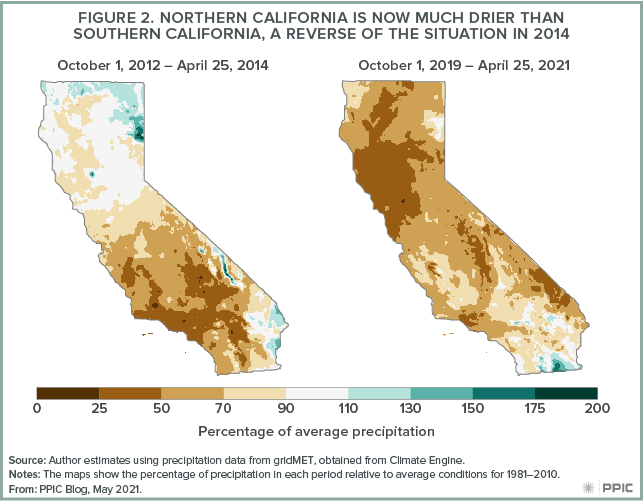 Regional differences in drought intensity also show up in streamflow conditions (Figure 3). Roughly two-thirds of the gages that measure streamflow in the North Coast show severe drought conditions, and many are at record lows. Flows at most of these gages were already quite low last year, marking two consecutive years of stressful conditions for these ecosystems. 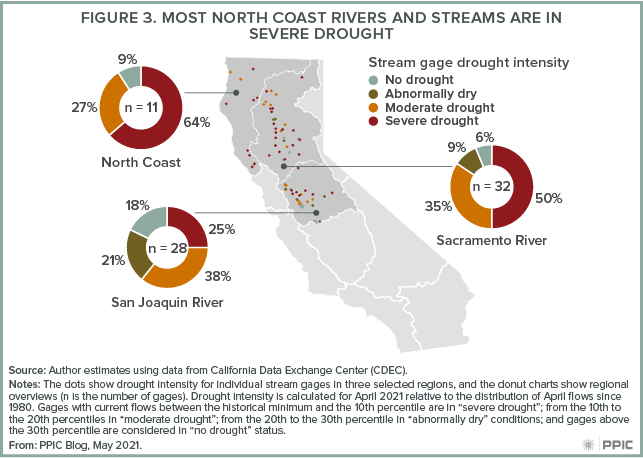 There are also significant differences in streamflow conditions between the Sacramento and San Joaquin Valley watersheds. This reflects differences in both precipitation (Figure 2) and the status of reservoirs (Figure 4), since reservoir releases tend to dominate flows in these regions during drought. Storage in the Sacramento watershed is quite low—comparable to year three of the past drought. In the San Joaquin Valley, reservoir levels are also worrisome, although not as bad as in 2014. In both regions, snowpack is better than it was in 2014 and 2015—but not enough to provide significant drought relief. 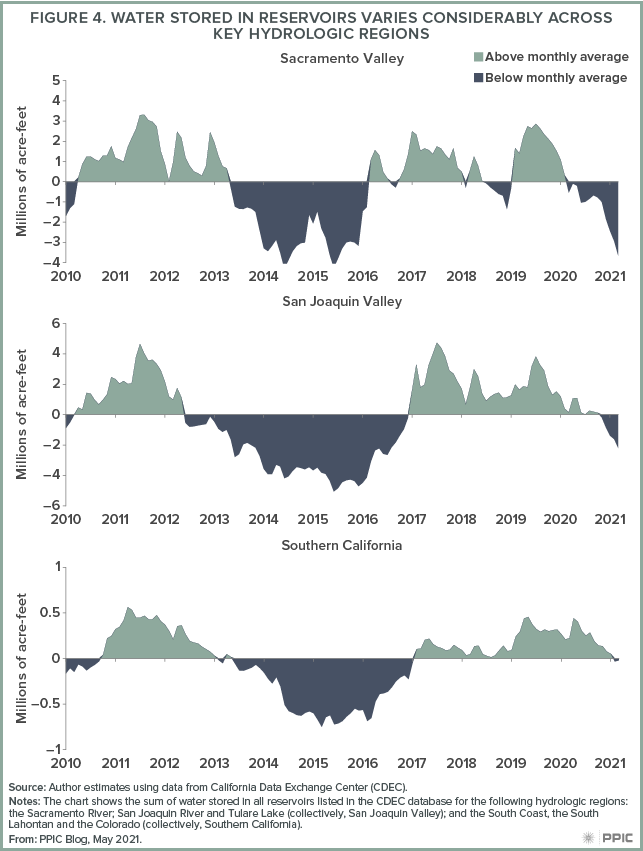 Reservoir conditions in the Sacramento watershed are critical not only for the region itself, but also for Bay Area and Southern California cities and San Joaquin Valley farms served by the Central Valley Project and State Water Project. Although we are only in year two of the current drought, water allocations from these projects have fallen precipitously—to 0% for the CVP and 5% for the SWP—on par with 2014, the third year of the past drought. This will spur more groundwater pumping, and cause groundwater levels to fall again.

Reservoir status in Southern California is still relatively good, in sharp contrast to the rest of the state. This highlights an important point about regional differences in drought conditions: even though it has been very dry in Southern California, water scarcity is not yet a problem due to reserves, which also include water stored in Lake Mead and groundwater banks. The portfolio of water sources for California’s large urban areas plays an important role in drought resilience.

The combination of low precipitation and high temperatures made the last drought difficult to manage—conditions that are building with this drought as well. This time there are some different early hot spots, such as the Klamath and the Russian River watersheds. And just two years in, the dry conditions in the Sacramento watershed are already having significant statewide ramifications. Our next post evaluates some of the actions that can be taken now to reduce drought impacts and prepare for continuing drought.

Video: Is California Ready for Drought?