How California’s Water Bond Is Being Spent

Jelena Jezdimirovic, Ellen Hanak December 13, 2017
NEVER MISS AN UPDATE!
Sign up for our blog alerts to receive insights from PPIC by email.

California has many unmet needs in its water system—most notably in the areas of flood protection, safe drinking water, stormwater treatment, and ecosystem support. While dedicated funding over the long term has been hard to come by, water bonds have helped fill some gaps in these areas. Looking at how the 2014 water bond is being spent can give us some insights into how bonds are turned into projects on the ground. This is particularly important as three new bond proposals are floated for 2018.

The state’s 2014 bond, Proposition 1, provides $7.5 billion in funding. The money is broken into seven funding categories. The bond language preauthorized $2.7 billion for water storage projects. For the other six areas, spending must be appropriated in the state budget. Once the funds are appropriated in the budget, the state agencies distribute them to selected projects.

With the 2017–18 budget, the legislature has now appropriated more than 86% of Proposition 1 funds. The largest new appropriation is more than $200 million for “Integrated Regional Water Management,” a grant program for collaborative regional projects to address complex water management challenges. In addition, more than $111 million was appropriated for flood management, reflecting statewide concerns about dam and levee infrastructure after the Oroville dam incident. 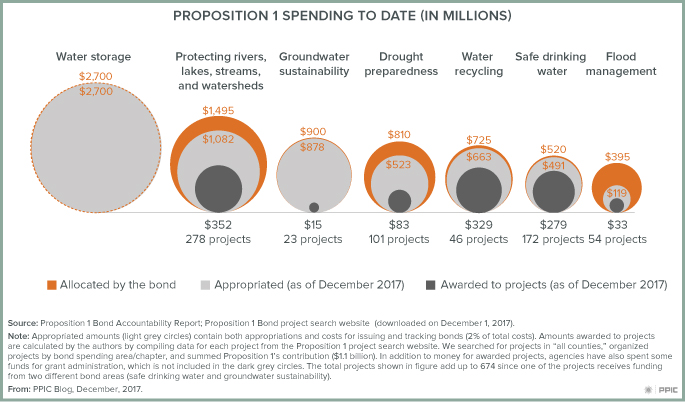 Of the Proposition 1 money appropriated, approximately $1.1 billion has been awarded for spending. That is roughly a billion dollars since June 2016. The number of projects has spiked since then as well, from 117 to 673. Even with this large increase in spending, only 14% of the bond has been awarded so far. This pace of water bond spending—about $785 million per year—is on par with patterns observed since the early 2000s.

Ecosystems in decline and disadvantaged communities that lack access to safe drinking water—problems made worse by the latest drought—lead the way in number of projects awarded, with 278 and 172 grants, respectively. Fifty-four grants have been awarded for the maintenance of Delta levees. Another 101 grants will foster regional drought preparedness. And 46 grants will be used for urban wastewater recycling projects.

The largest pot of money—$2.7 billion for water storage—is expected to be awarded in June 2018. In total, 12 projects—seven for surface water storage and five for projects that focus on storing more water underground—are competing for some portion of the money. The California Water Commission is now reviewing proposals. The winning bids will only receive funding for “public benefits” resulting from the new storage. At least half of these benefits must be for improving ecosystem conditions. Other qualifying benefits include flood protection, recreation, emergency water supplies, and water quality improvements.

Looking beyond Proposition 1, three other water bonds have been proposed for the ballot in 2018. The $4 billion California Parks, Environment, and Water Bond was approved by the legislature, signed by the governor in September, and will appear on the June 2018 ballot. This bond would distribute a third of its revenue to park improvements, and the rest to environmental restoration and water and flood infrastructure. Specific areas include Salton Sea restoration, ecosystem improvements in the Sacramento and San Joaquin River watersheds, groundwater recharge, and safe drinking water.

Two other bonds—which would be put on the November 2018 ballot through the initiative process—are still under consideration. A bond proposal from Gerald Meral, a former state water official, would authorize $8.9 billion for various water supply and water quality projects, including water infrastructure improvements, safe drinking water projects, habitat protection, groundwater replenishment, and dam repairs. And a $7.99 billion bond proposed by environmental lawyer Joseph Caves would award half of its funds to drinking water safety improvements, and the rest to ecosystem restoration, and state and local park projects.

Read our June 2016 blog post, “How is California Spending the Water Bond?”