The California State University system is taking significant steps to improve its financial position and increase transparency with a new public, online Financial Transparency Portal. It shows that CSU is building both capital and operating reserves that could help soften the blow in the event of an economic downturn.

The new Transparency Portal shows that CSU’s reserves have grown in recent years, for both capital spending—which includes equipment acquisition, facilities maintenance and repairs, and capital improvement and construction—and operations. To put this growth into context, in CSU’s 2017–18 budget a little more than one third of total expenditures went toward salaries and wages (about $3.6 billion). The system’s operating reserve for that year was about $800 million, meaning that if that system spent its entire reserve it would still only be able to cover a very modest cut in state appropriations. 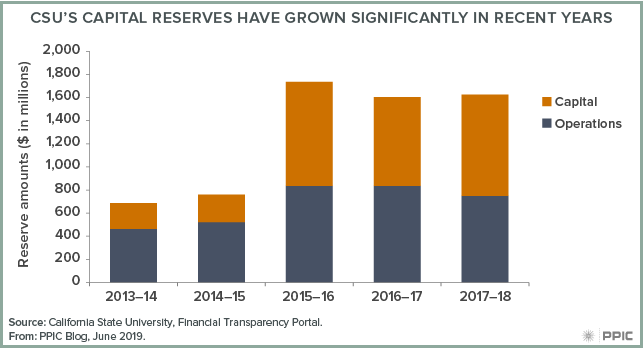 The portal also shows that some of the greatest growth has occurred in funds for capital improvement and construction. These funds are typically allocated to upgrade existing facilities and build new ones. This is very good news in terms of long-term planning, and provides a good example for the state’s other higher education institutions.

There also has been modest progress in accumulating savings to simply maintain facilities, an area that saw deep cuts during the Great Recession. 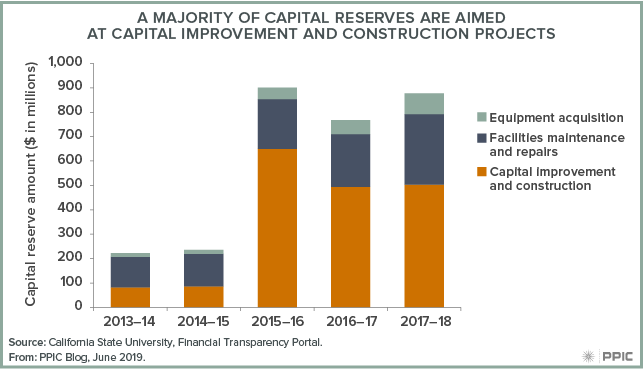 The growth in capital reserves is promising and helps to safeguard CSU’s ability to meet the needs of its future students. Similarly, building operating reserves is key to preserving access and maintaining strong student outcomes during the next recession.

Making financial information transparent, including campus-level information, is also a positive step. It clarifies the allocation of resources and reveals the details of CSU’s reserve strategy—making important information available to public officials and the attentive public.