The teacher strikes in Los Angeles and Oakland reflect the fiscal stresses facing many school districts across the state. Rising pension and health care costs account for some of this pressure. For many districts, declining student enrollment is another factor.

Over the past five years, overall K–12 enrollment in California increased by only 0.1%, or 6,600 students out of the more than 6.2 million attending public schools. This stable picture masks significant variation across districts. Roughly half of the state’s nearly 1,000 districts experienced enrollment losses, while the other half grew over this time. In many cases, the change was small: about 40% of districts experienced a net change—gain or loss—of less than 5% from 2012–13 to 2017–18.

However, the majority of districts saw an enrollment change of more than 5%. Indeed, 107 districts lost more than 15% of students. These districts were generally small: the average school had 700 enrolled students in 2012–13 and lost more than 170 students over the five-year period. In some cases, these large enrollment losses were associated with the closing of a charter school. Many of these districts, though, have only one school, and large percent reductions in enrollment require significant cuts in teachers, administrators, and other staff. 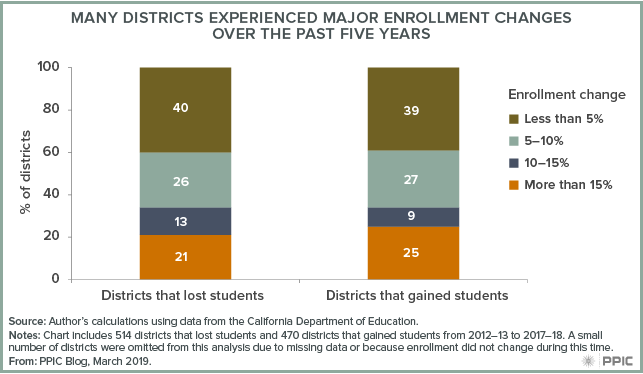 Many large districts also lost significant numbers of students over the past five years. In Los Angeles County, for instance, 61 of 79 districts experienced enrollment declines—including Los Angeles Unified, which lost 34,000 students (a 5% decline) and Long Beach Unified, which lost almost 7,600 students (9%). In addition, seven districts with more than 10,000 students lost between 10% and 15% of enrollment. For a district of 10,000 students, losing 10% of enrollment translates into 1,000 fewer students—equal in size to two typical elementary schools. For example, Montebello Unified saw a dramatic 13% decline, losing more than 4,000 students during the five-year period.

Declining student enrollments can be due to a wide range of factors—changes in charter school enrollments, decreasing birth rates, or families moving away, among others. Laying off teachers and adminsitrators is painful—and closing schools is a particularly wrenching topic, as parents value their local schools.

Governor Newsom’s proposal to help districts with rising pension costs may relieve some—but not much—of the financial pressure for districts. K–12 financing in California is also affected by voter-approved initiatives that make significant school funding increases unlikely in the near term. There’s no easy solution, but unless these dynamics change, districts will need to learn to adjust to long-term enrollment and revenue reductions or face the risk of insolvency.

Declining Enrollment in California Schools: Fiscal Challenges and Opportunities in the Coming Decade