Nearly three decades after California started authorizing charter schools, state lawmakers have renewed the debate over their rules and regulations. Today, there is a package of bills aimed increasing charter oversight moving through the legislature, and the governor has taken steps to address related issues. As the debate continues, the PPIC Statewide Survey has taken an in-depth look at Californians’ views of charter schools and school choice.

PPIC’s latest survey on K–12 education finds that Californians have mixed views on charter schools overall (49% favor, 46% oppose). Differences across regions and demographic groups are particularly notable. For example, half of Latinos (51%) and whites (50%) are in favor of charters in general, compared to fewer Asian Americans (43%) and African Americans (36%). Regionally, majorities in the Inland Empire and Orange/San Diego are in favor, while those in the Central Valley and Los Angeles are divided; a majority of San Francisco Bay Area residents are opposed. 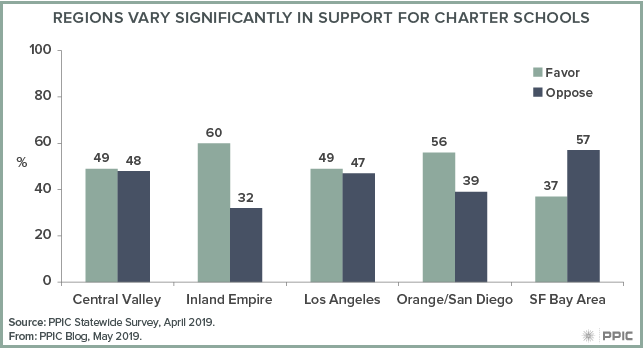 Looking more closely at charter school issues further highlights regional and racial/ethnic differences. On the question of transparency and accountability, overwhelming majorities across racial/ethnic groups say it is important for charters to operate with the same standards as traditional public schools. This includes 87% of Asian Americans, Latinos, and whites, and 72% of African Americans.

When it comes to charters taking away state funding that would otherwise be available for traditional public schools, seven in ten Los Angeles residents (71%) say they are concerned, compared to about six in ten in the Inland Empire (65%), San Francisco Bay Area (63%), and Orange/San Diego (62%); over half in the Central Valley (55%) express concern.

With respect to school choice, African Americans (52%) are much more likely than whites (37%), Latinos (34%), and Asian Americans (33%) to say it is very important for parents in lower-income areas to have the option of sending their children to charters instead of traditional public schools. 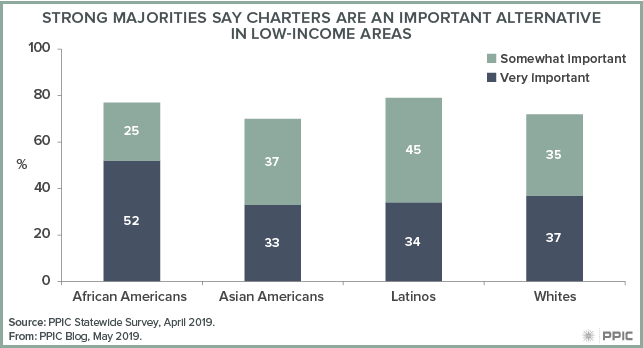 Earlier this year, Governor Gavin Newsom commissioned a task force to examine the impact of charter school growth on district budgets. He also signed legislation requiring the state’s 1,300-plus charter schools to follow the same transparency laws that apply to public school districts. As these policies play out, the PPIC Statewide Survey will continue to track Californians’ concerns and preferences on charter school issues.