Environmental Priorities and the Midterm Election

Mark Baldassare August 8, 2018
NEVER MISS AN UPDATE!
Sign up for our blog alerts to receive insights from PPIC by email.

Just three months ahead of a consequential midterm election, California and the federal government continue to move in very different directions on environmental policy. Last week, the Trump administration’s efforts to roll back strict automobile emission standards were strongly criticized by the Brown administration. State officials have also pushed back on federal efforts to increase offshore oil drilling and the president’s decision to exit the Paris Agreement on climate change. Meanwhile, personal experiences with a prolonged drought and recent severe wildfires are raising Californians’ awareness about the impacts of climate change. Where do California voters stand on environmental issues and what are the implications for November?

Californians’ support for environmental protection runs deep. Consider emissions standards. In the July PPIC survey, 60% of California registered voters say that they are in favor of setting higher emissions standards for automobiles. Majorities of voters across age, education, gender, income, and racial/ethnic groups support this environmental policy. Majorities of Democrats (74%) and independents (62%) and 34% of Republicans are in favor. Notably, 52% of registered voters living in the nine competitive House districts—as rated by the Cook Political Report—favor higher auto emission standards.

Or take another area of state-federal policy conflict over the environment, offshore oil drilling. Sixty-six percent of California registered voters are opposed to more drilling off the California coast. Opposition is high among Democrats (82%) and independents (66%), and reaches 40% among Republicans. Majorities oppose it in both the coastal and inland regions of the state and across age, education, gender, income, and racial/ethnic groups. As for the registered voters living in the nine competitive House districts, 56% are opposed to allowing more offshore drilling off the California coast.

In the midterm election context, Californians are indicating strong opinions on environmental matters. A record-high number of registered voters say that the gubernatorial candidates’ positions on the environment are very important in determining their vote (39% 2002, 46% 2006, 42% 2010, 40% 2014, 53% 2018). 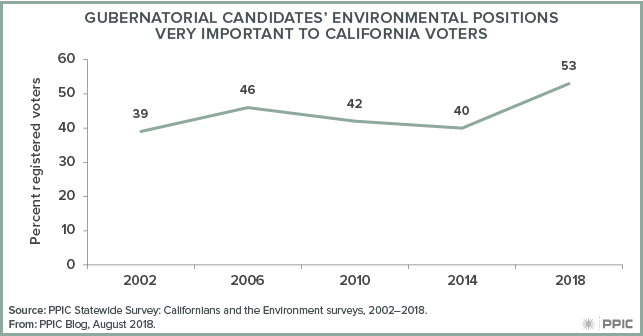 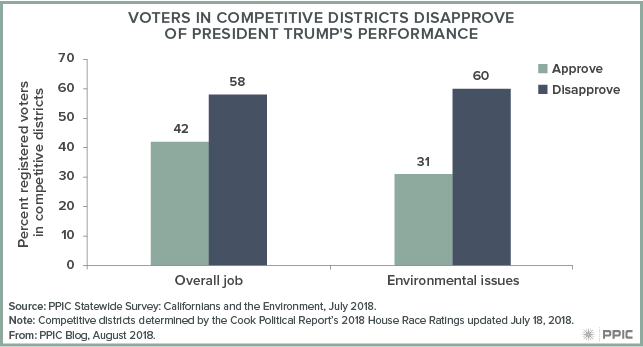 Californians’ environmental priorities are high on our list of political wildcards in this important midterm election. Stay tuned as the PPIC Statewide Survey monitors this trend and other topics in our pre-election polling.