For California’s Homeless, CalFresh Is Essential Part of Safety Net

Last Friday, Los Angeles County released homeless counts for 2020, showing numbers jumped 13% from January 2019 to January 2020. This spike occurred even before the pandemic-induced shutdown devastated the finances of many Californians. The statistics for California have been sobering for years. According to HUD point in time counts, the homeless population rose by 16% from 2018 to 2019, and the state is home to about half of the nation’s unsheltered homeless.

CalFresh, the state’s largest means-tested food assistance program, is one of few safety net supports accessible to adults without children who are experiencing homelessness. And because CalFresh benefits typically can be used only to buy groceries or seeds for planting, several counties, including Los Angeles, San Diego and Orange, have obtained the authority to enable elderly, disabled and homeless recipients to buy meals in certain restaurants.

In data from 2016–2018, on average about 340,000 CalFresh beneficiaries, or 8.4%, were homeless at some point during the year. Younger adults, age 18–49, make up a solid majority at about 60% of the CalFresh homeless, while children comprise 14% and adults 50 and older make up about a quarter. Strikingly, about 39% of CalFresh recipients in families containing only adults ages 18–49 are homeless, while 3% of recipients in families with children are homeless.

Most homeless CalFresh beneficiaries are eligible for the maximum CalFresh benefit, averaging about $175 per family member per month. But most younger adults have no other support. That is, less than 1 in 4 younger adults without children have current income from other parts of the social safety net—primarily General Assistance or social security—while 29% of older adults have other safety net income.

Nearly two-thirds of homeless CalFresh families with children have access to other parts of the social safety net. For example, 59% have access to CalWORKs. Across all family types, 14% have income from earnings in the current month—although other research shows that higher shares have earnings in earlier months. 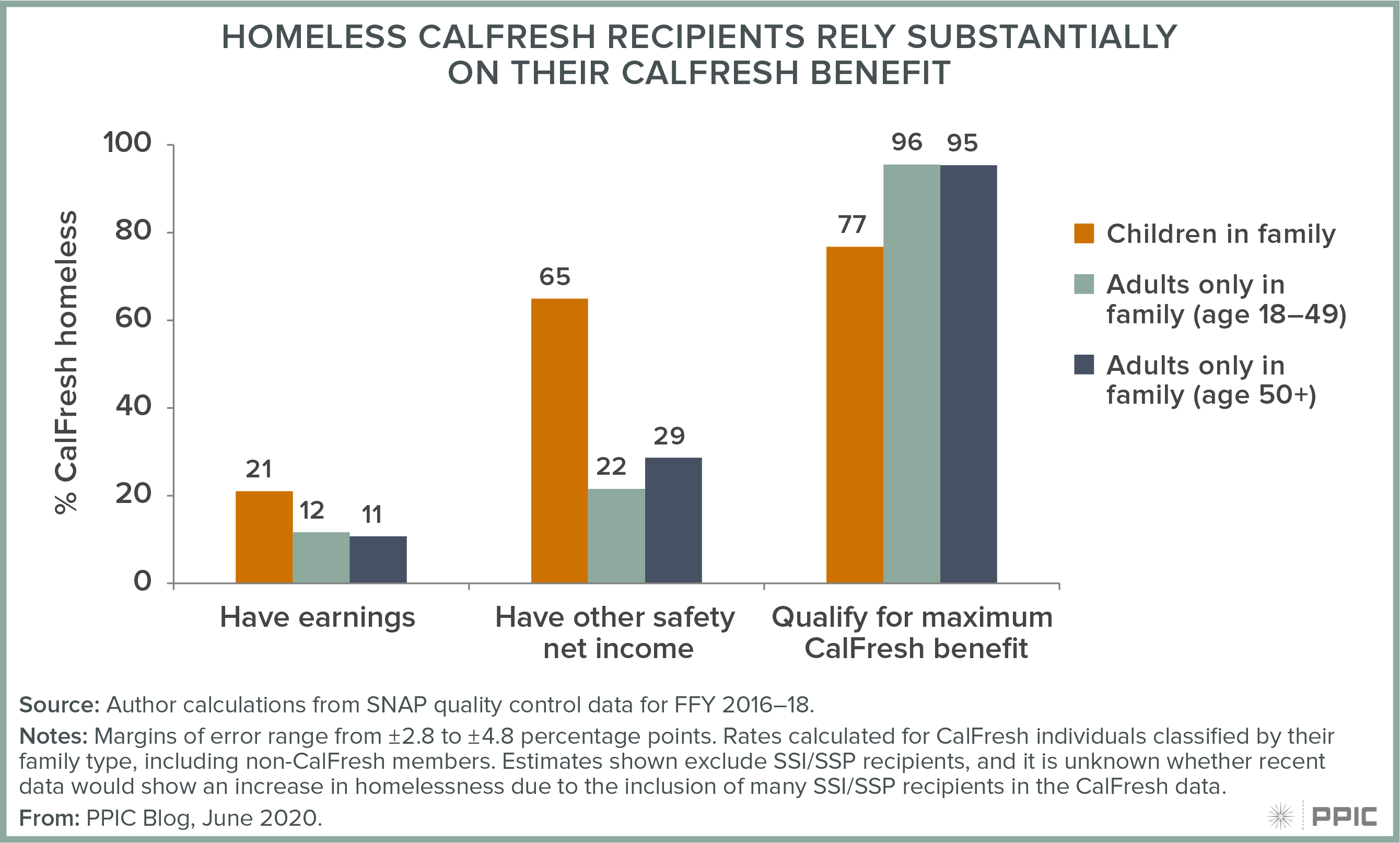 Policymakers and stakeholders have long been working to improve access to CalFresh so that more Californians have the ability to afford food. For example, a year ago California expanded the CalFresh program to include Supplemental Security Income (SSI/SSP) recipients.

During this recession, federal actions have been key because the federal government underwrites most CalFresh benefits. The pandemic-related FFRCA and CARES Acts included several provisions related to food assistance, including postponing strict work requirements to qualify for benefits that likely helped a number of homeless CalFresh adults. The House-passed HEROES Act proposes extending many temporary provisions and would temporarily increase CalFresh benefits. If enacted, these provisions would help 4.5 million Californians now accessing CalFresh, including many of those experiencing homelessness.

Californians Are Grappling with Homelessness