In September, California’s economy remained in severe distress. The unemployment rate stood at 11%, falling just 0.2 points since the previous month. The industries hit hardest by this recession continued to lag behind. Students also went back to school, with most learning virtually from home. Early evidence suggests that this may have had a disproportionate impact on how women are faring in the state’s labor market.

Women are slightly more likely to work in the industries most affected by the recession (16% of women and 14% of men worked in these industries in February 2020). This is one factor that has created a gap in the labor market standing of men and women. Though men and women had similarly low unemployment rates in February and March (5.2% and 5.0%, respectively), unemployment has jumped higher for women, and the gap remains despite improvements in recent months.

The number of people who are underemployed or jobless but not looking for work reveals a similarly gendered pattern. As many as 19% of women are out of work, are working fewer hours than they’d like, or have stopped looking for work because they don’t think jobs are available. The comparable estimate for men is 16%, reflecting a small but important gap that has emerged between men and women. 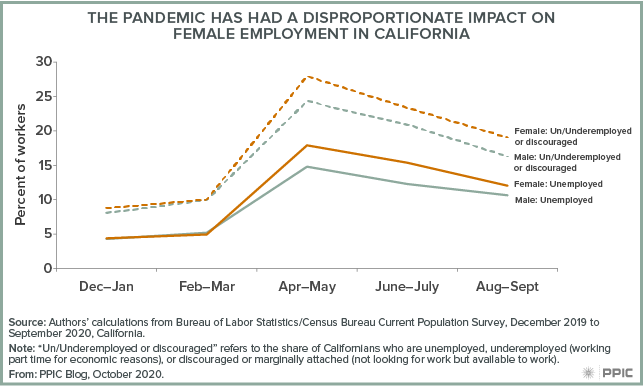 Stories abound of women leaving work entirely—or considering leaving—because of the need to care for children (even in normal times, working mothers typically spend more time caring for children than working fathers do). National data show that many more women have left the labor force than men, with job gains for both groups in the summer seemingly erased by September. These declines are more severe for African American and Latina women, as of September 2020.

In California a similar pattern appears to be emerging, though the data are somewhat limited. The share of women who are participating in the labor force declined steadily in March, April, and May. Despite some signs of an improvement in the summer, labor force participation stagnated in early fall. The timing of this stagnation with the start of the school year is perhaps more than a coincidence. 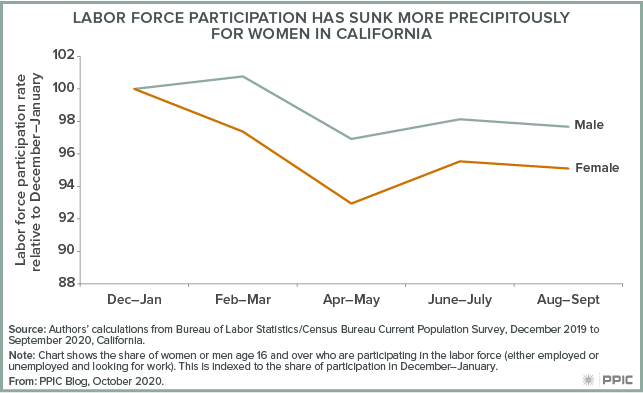 Larger declines in labor force participation among women—along with the increased likelihood of unemployment and underemployment among those in the labor force—are a double whammy, highlighting the labor market difficulties for women in the current crisis. The consequences of both can be dire and long-lasting. Research suggests that long-term earnings are diminished for women who leave the labor force to care for children. And for all workers, the effects of job loss in recessions can have scarring effects on earnings and career trajectories.

Policies that address the pandemic and support economic recovery would help eliminate emerging gender gaps driven by these uneven labor market losses. In the near term, controlling the spread of COVID-19 is paramount, along with continuing to implement strategies that allow businesses and schools to reopen safely.

The different experiences of men and women in the current crisis also underscore the importance of policies to ease child care burdens and enable parents to fully engage in the workforce. Policymakers must pay careful attention to these difficulties to ensure that current struggles do not lay the foundation for persistent or growing gender inequities in the labor market.