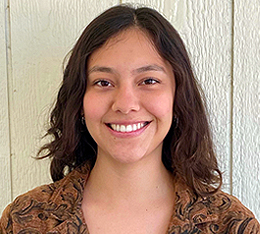 Four out of five children in California will benefit from a one-year expansion of the federal Child Tax Credit (CTC), recently signed into law under the American Rescue Plan Act (ARPA). Low-wage workers have borne the brunt of pandemic’s economic downturn, and the expansion can substantially boost resources for low-income families with children: for the first time, families with little to no earned income can receive the CTC’s maximum value as a refund.

Under the ARPA, the CTC increases from $2,000 to $3,000 for children under age 18, including 17-year-olds for the first time, and rises to $3,600 for children under age 6. The expansion targets lower-income families because added amounts phase out for individuals earning more than $75,000, or married couples earning more than $150,000. The CTC will also allow advance monthly payments of half of the families’ estimated credit in 2021. Nationally, the full economic relief package could reduce child poverty by at least half.

In California, these additions to the CTC could cut child poverty by a third, from 18.8% to 12.8%, and cut the deep poverty rate by half, from 4.1% to 2.1%, based on data from the California Poverty Measure (CPM) produced by PPIC and the Stanford Center on Poverty and Inequality. These data are from 2018, and do not cover the economic impact of COVID-19 nor the stimulus payments and safety net expansions that may have initially prevented poverty rates from rising. Still, they help to provide clear ballpark estimates of the impact of the CTC expansion.

While the expansion could lift 32% of children out of poverty, effects will vary across the state. In the Central Valley and Sierra region, Sacramento area, and Inland Empire, child poverty rates are likely to fall most, as more families are eligible for larger credits due to lower income levels (we see a similar regional pattern in the impact of existing social safety net programs with means tests). 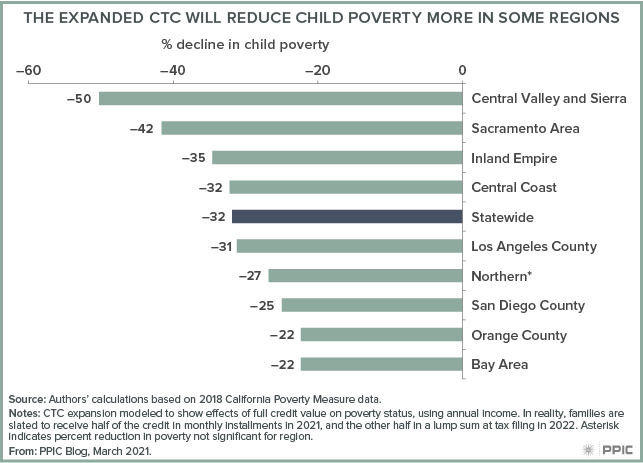 Through the CTC, real progress may be possible in reducing California’s racial and ethnic disparities in child poverty. Poverty rates are projected to fall for children in all racial/ethnic groups, but Latino children and Black children will likely see the largest reduction, at 8.4 percentage points and 7.2 percentage points. This change would narrow the poverty gap between Latino and white children by 59%, and between Black and white children by 42%. But Black and Latino children experience poverty at higher rates than white children, and disparities would remain.

The ARPA includes several provisions for families beyond the expanded CTC, including another round of stimulus payments, and an extension of previous increases in food assistance (SNAP) benefits. In the short term, these measures will provide important additions to family resources. If extended beyond one year, the expanded CTC may continue to make major contributions to reducing child poverty in California, alongside other major safety net programs, setting a precedent for state policymakers to consider similar expansions in eligibility for the CalEITC and the Young Child Tax Credit.