On March 13, Governor Newsom signed an executive order placing a moratorium on the death penalty for the 737 inmates on death row in California’s prisons. The order suspends executions for the remainder of Newsom’s administration but does not allow for the release of any inmates or alter any convictions or sentences. California joins Colorado, Pennsylvania, and Oregon as the only states where governors have taken executive action to halt the legal use of the death penalty.

Permanently abolishing California’s death penalty would require voter approval. When this question was on the ballot in 2012 and 2016, a slight majority of Californians (52% in 2012 and 53% percent in 2016) voted to uphold the death penalty as the maximum punishment for those found guilty of first-degree murder. 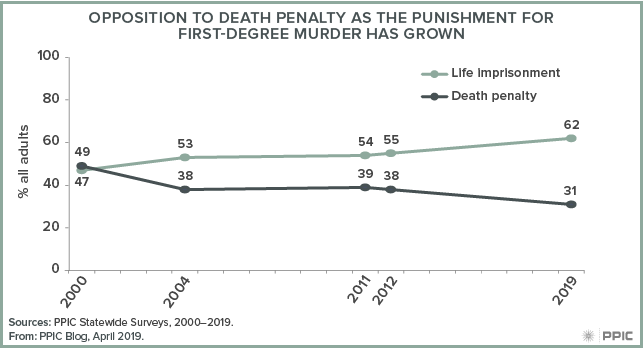 The issue is highly partisan: three in four Democrats (76%) and more than half of independents (56%) favor life imprisonment over the death penalty, compared to only one in three Republicans (32%). Since September 2012, when we last asked this question, support for life imprisonment has risen substantially among Democrats (up 9 points) and independents (up 11 points)—but stayed about the same for Republicans (down 1 point).

Support has also grown in all major regions of the state, with particularly large shifts in the Inland Empire and Orange/San Diego Counties. In the Inland Empire, 73% of residents favor life imprisonment, up 28 points since 2012. In Orange/San Diego Counties, 63% prefer life imprisonment, up 11 points since 2012. 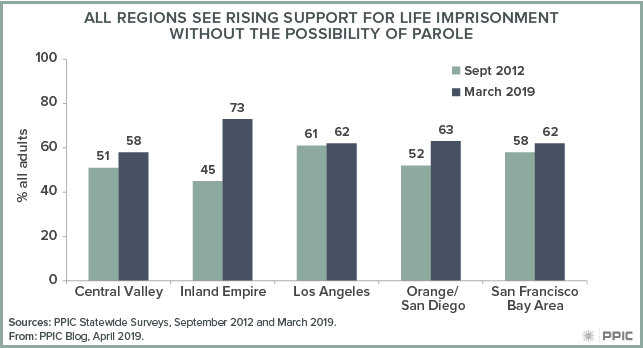 Following the governor’s executive order, Assemblymember Marc Levine introduced a constitutional amendment that would abolish the death penalty in California. If approved by a two-thirds vote in the legislature, it will appear before voters on the 2020 ballot. Stay tuned as we continue to monitor Californians’ perceptions and policy preferences on this issue.

Video: Californians and Their Government