On June 4, voters in the Los Angeles Unified School District (LAUSD) will decide the fate of Measure EE, a historically large parcel tax that would generate about $500 million a year. Like all parcel taxes, Measure EE has a high bar to clear: two-thirds of voters must approve it. More than half of all proposed parcel taxes have cleared this bar since 2003.

The California Legislature is considering a constitutional amendment to lower the parcel tax vote threshold to 55%. If the legislature approves this proposal, California voters will weigh in. The amendment’s success at the ballot box is far from certain: the April 2019 PPIC Statewide Survey found that just 39% of likely voters would favor such a measure. But what might happen if the legislature and voters did ultimately approve the lower vote threshold? If the state’s recent experience with school bond measures is any indication, we would expect to see more parcel taxes placed on the ballot, with more of them passing.

The parcel tax is a California phenomenon. Proposition 13 (1978), which placed strict limits on commercial and residential property taxes, included a provision allowing cities, counties, and other districts to impose “special taxes” if two-thirds of voters approved. While the majority of parcel taxes levy a flat dollar amount per parcel—a lot or piece of property—Measure EE ties the dollar amount to the square footage of the building(s) on each parcel.

California voters lowered the approval threshold for school and community college bond measures to 55% when they approved Proposition 39 in 2000. The passage rate for K–12 bonds increased from 62% in the five-year period before Prop 39 to 79% in the five-year period after it was approved, and both the number of measures and rate of passage for K–12 bonds have been rising since 2011. This increase is especially striking given that the median bond amount has more than doubled (from $20 million to $45 million) since the threshold was lowered.

The trend has been similar for community college bond measures, though there are far fewer community college districts (73) than school districts (1,026) in the state. After Prop 39 passed, more colleges placed measures on the ballot—especially from 2001 to 2005—a higher share passed, and bond amounts increased. Passage rates increased from 42% before Prop 39 to 86% since 2011. The median amount has more than tripled since 1996 (increasing from $87 million to $350 million). 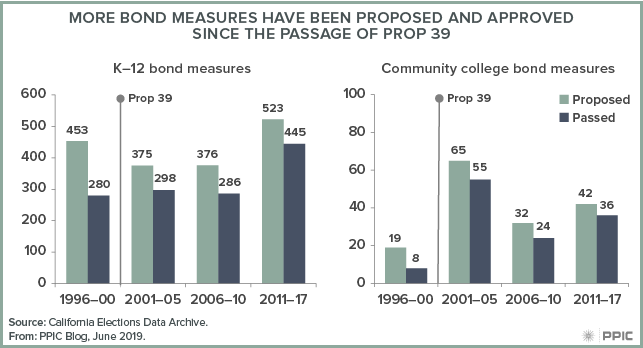 The vote on Measure EE will be important for LAUSD—the resources that the parcel tax would generate are critical to the district’s future finances. The vote will also be worth watching with the pending constitutional amendment in mind. If the measure is approved, lawmakers may see less need for lowering the parcel tax threshold. If it is defeated, the amendment may gain momentum.

Parcel Taxes as a Local Revenue Source in California

Parcel Taxes for Education in California