Mark Baldassare November 9, 2017
NEVER MISS AN UPDATE!
Sign up for our blog alerts to receive insights from PPIC by email. 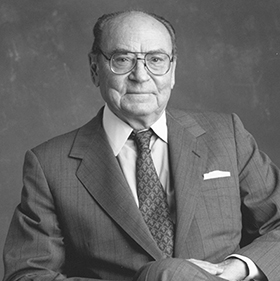 With the passing of Arjay Miller last week at 101, our nation lost a giant. Arjay defined the Greatest Generation and built a life and legacy through his service to others. Organizations across the United States—PPIC among them—owe an enormous debt of gratitude to this visionary and determined leader. It is our obligation now to fulfill that vision of leadership—private and public—for the common good.

Along with William Hewlett and Roger Heyns, Arjay co-founded PPIC in 1994. He served as the chair of PPIC’s board of directors from 1995 to 1998 and remained a member of the board until 2006. In 2000, he and his wife gave a generous gift to PPIC to create the Arjay and Frances Fearing Miller Chair in Public Policy. He was responsible for helping to secure a solid financial foundation for PPIC and for establishing many of the principles and policies that guide us to this day. Why focus on California, rather than the nation? “The rest of the country follows us,” he said at the time, citing issues ranging from clean air to affirmative action. His prescience was a gift to the people of California.

Arjay’s resume is the stuff of legend. He was one of the ten “whiz kids” who left the Pentagon after World War II and played a major role in reversing the fortunes of the Ford Motor Company. He was president of Ford from 1963 to 1968 and vice chair until 1969, when he was appointed dean of the Stanford Graduate School of Business. There, he established the Public Management Program that has trained thousands of public sector managers and has also educated private sector leaders about public needs. Explaining his desire to instill public service values in the MBA worldview, he said, “Making money is the easy part. Making the world a better place in which to live is the hard part.” He served as dean for ten years. Under his guidance, the business school appointed its first women and ethnic minority faculty members and greatly magnified its prestige.

Arjay’s civic achievements are enduring. He was also the founding chairman of the board, and a life trustee, of the Urban Institute. He was an honorary trustee of the Brookings Institution; a board member of the Mellon Foundation, the William and Flora Hewlett Foundation, and SRI International; and a chairman of the Bay Area Council. Over the years, he also served on the boards of numerous corporations, including Ford, the Washington Post Company, Wells Fargo Bank, Levi Strauss & Company, and Burlington Northern.

Our thoughts and deepest sympathies go out to Arjay’s children, Ken and Ann, and the entire family. On a personal note, I feel deeply fortunate to hold the Arjay and Frances Fearing Miller Chair in Public Policy at PPIC and to have spent time with Arjay and his family over the years. I have been the lucky beneficiary of his storytelling—life lessons delivered with trademark modesty and wicked humor. He has been a friend, mentor, and trusted advisor to me.

During Arjay’s last visit to PPIC in April of this year, he celebrated the success of the institute he helped build and asked us to do more. We intend to honor his request.