Money Measures and the November Ballot

Earlier this year, we looked at how voters responded to the 107 money measures on the June ballot. The November election featured a considerably larger number of taxes, bonds, and fees: local governments asked voters to make decisions on 397 money-related questions, by our count. Most of these measures passed (314 or 79%), though success rates varied across types of taxation or borrowing. 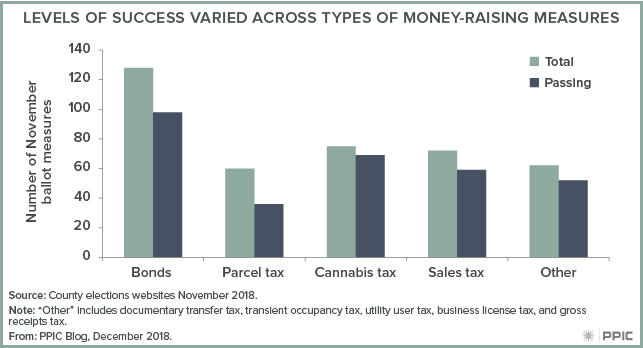 Overall, most bonds passed (98 of 128), but the share of successful bonds for K–12 schools and community colleges (92 of 116, or 79%) was higher than the share of general obligation bonds in other spending areas (6 of 12, or 50%). Since Proposition 39 (which passed in 2000) lowered the passage threshold for school bond measures to 55%, more than 1,400 school bonds have been placed on ballots, and voters have approved more than 80% of them. Of the 92 school bonds that passed this year, 65 met the 55% threshold but fell short of a two-thirds majority.

Parcel taxes, California’s unique way of increasing property taxes in the Proposition 13 era, were the least successful type of taxes on the November ballot. However, voters did approve 60% of these measures (36 of 60), which is in line with their historical success rate. Most parcel taxes proposed by school districts passed (11 of 16, or 69%), while those placed on the ballot by fire districts were less successful (9 of 19, or 47%).

Through 2017, local governments had proposed 80 measures to tax cannabis businesses, generally based on gross receipts, size (measured in square footage), or some combination of the two. On the November ballot, there were 75 cannabis tax measures. As has been the case historically, voters approved the vast majority (69, or 92%).

Is California shedding its reputation as an anti-tax state? The fact that local measures have been successful nearly 80% of the time does not necessarily reflect voter support for taxes in general. According to recent PPIC Statewide Surveys, a majority of Californians feel that their tax burden is greater than it should be and see Proposition 13 as “mostly a good thing.” Also, savvy local leaders put money measures on the ballot only when polling or canvassing suggests the probability of passage is high.

A more precise interpretation of recent results might be that local governments have been very successful at identifying the type of taxes and purposes around which they can mount successful campaigns. Moreover, recent local measures have been put before voters during a period of economic growth. It will be interesting to see if they continue to succeed going forward.

Funding Measures and the June Ballot