The United States is currently experiencing its worst measles outbreak in more than 20 years, with more than 1,234 people diagnosed with the disease this year—including 67 cases in California. One of the year’s most contentious bills, Senate Bill (SB) 276 addresses this issue by establishing stronger standardization and oversight of medical exemptions from vaccines. (In 2015, California was the first state to repeal religious and personal belief exemptions.) Approved by the assembly and senate and awaiting the governor’s signature, the bill has attracted numerous protests in Sacramento. With public health concerns on one hand and parental choice on the other, how do Californians view vaccinations?

In PPIC’s May Statewide Survey, an overwhelming majority of Californians (73%) said parents should be required to vaccinate their children for diseases like measles, mumps, and rubella. This view is held by at least seven in ten across genders, political parties, and those with and without children in the household. Majorities across demographic groups and regions say vaccinations should be required, as do about three in four Asian Americans, whites, and Latinos—compared to 53 percent of African Americans. 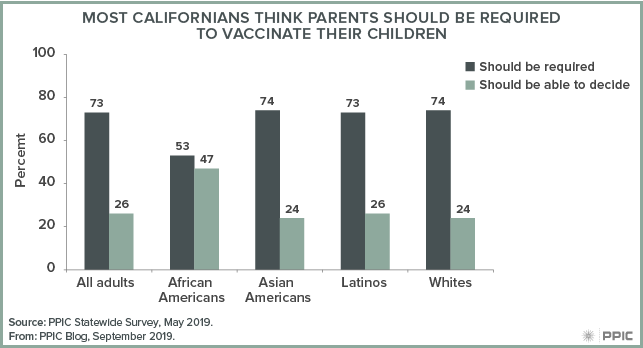 Vaccine safety has been an ongoing matter of concern, despite assurances from the scientific community. Today, nearly all Californians say that the vaccines given to children are safe (62% very, 27% somewhat). The share that say vaccines are very safe is held by strong majorities across parties, as well as majorities across regions and demographic groups. Notably, among Californians who say parents should be able to decide whether or not to vaccinate their children, 73% say vaccines are safe.

At the same time, eight in ten residents are concerned that measles outbreaks will become more widespread (43% very, 36% somewhat). This view is held by majorities of Californians, although the share who say they are very concerned is higher among older Californians than younger Californians (48% to 34%) and among women than men (48% to 38%).

Even as most Californians support vaccination requirements—and worry about public heath—the discussion around SB 276 remains volatile. PPIC will continue to monitor public opinion as this important issue unfolds.

How Do Californians View the COVID-19 Vaccine?