Progress under Prop 47 but Racial Disparities Persist in California Arrests

Protests and civic unrest have marked the senseless death of George Floyd, another African American man in police custody, giving voice to real and significant racial disparities in our criminal justice system. In California, these disparities are large and widespread. And yet one recent reform appears to be making some headway in reducing racial and ethnic differences in arrest rates.

Our research shows that since the implementation of Proposition 47, which reclassified certain drug and property crime from felonies to misdemeanors, racial disparities in arrests and bookings have declined. While our upcoming report—releasing in late June—looks across racial and ethnic groups, in this post we focus on African American and white men.

Today, the arrest rate for African Americans—that is, the number of arrests per 100,000 residents—is three times that of whites. In the early 1990s, when the rate reached its peak, it was 3.6 times as large. 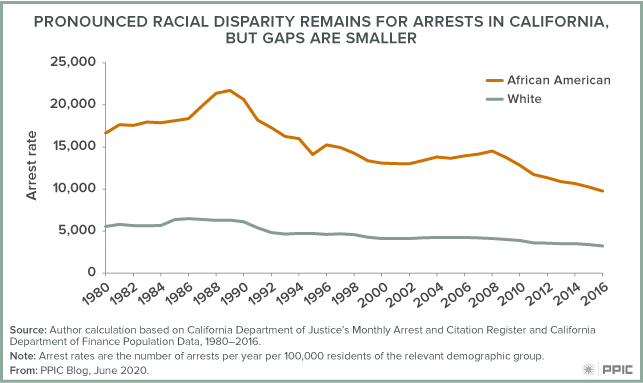 A closer look reveals that felony arrests and bookings for drug and property offenses plunged in the wake of Prop 47, especially for African Americans. Broadly, an arrest can lead either to a cite and release—an order to appear in court at a future date—or a booking into jail. Before Prop 47, the booking rate for African Americans (per 100,000 residents) stood at around 850 for both drug and property crimes. After Prop 47, the booking rate for drug offenses dropped to 300; for property offenses, it fell to 550. 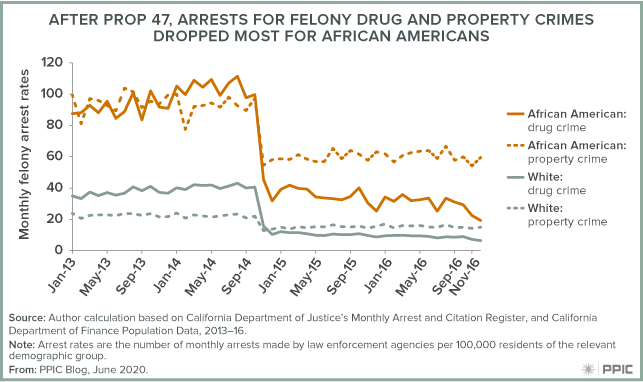 While the data suggest a decrease in racial disparities in the wake of Prop 47, disparities clearly remain, and they are significant and pervasive throughout California. Almost all counties show an arrest rate for African Americans at least double that of whites, while 13 counties have rates at least five times that of whites. While it is critical to note where criminal justice reforms have made progress possible, California, like the nation, has a long way to go.