Record Growth Puts Money in the Bank for California

This July marks the longest period of economic expansion in US history. For 121 months and counting, the national and state economies have experienced continuous growth. 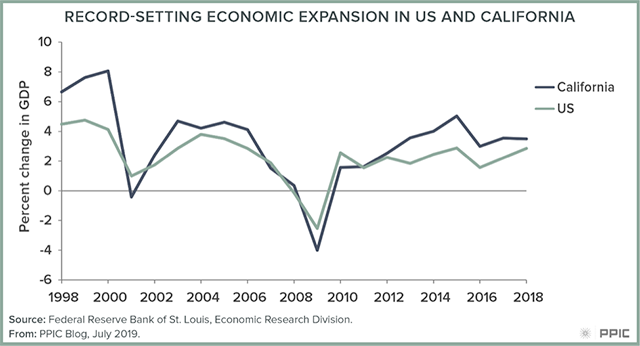 One consequence of this sustained economic growth? An increasing stream of tax revenue flowing into the state’s treasury. This, in turn, has shaped a new state budget that contains record-breaking levels of spending.

In terms of fiscal sustainability, however, the most intriguing element of the new budget may be the dollars that weren’t spent. The budget that the legislature passed and governor just signed includes total budget reserves of more than $20 billion—also a record for the state.

The continued accumulation of budget reserves represents important progress toward preparing the state for an economic slowdown. Because of California’s tax structure, recessions hit the state’s budget particularly hard. Past recessions have caused deep drops in the level of General Fund dollars available, leading to a combination of spending cuts, tax increases, and borrowing to balance the state’s budget.

Building budget reserves should enable California to reduce the impact of a recession. Our estimates suggest that the current level of reserves would allow the state to weather the impact of a mild recession. However, they would be insufficient in the face of a moderate to severe downturn. In other words, there is still work to be done.

None of this matters if the economy never slows down. Just because the economy has gone up for so long, doesn’t mean it must fall—there is no equivalent to gravity when it comes to economics. But history suggests that recessions have a way of interrupting periods of growth. And there are some signs that clouds are gathering on the economic horizon: bond rate curves, drops in consumer confidence, and uncertainty surrounding tariffs and trade. At the same time, the stock market just finished a very positive first half of the year.

Forecasting the timing of the next recession is a much more difficult proposition than asserting that there will be one. The same could be said of California’s earthquakes. But as with earthquakes, the fact that we don’t know exactly when the next recession will hit shouldn’t stop the state from preparing for it.

Preparing for California’s Next Recession