Alyssa Dykman, Gokce Sencan August 5, 2019
NEVER MISS AN UPDATE!
Sign up for our blog alerts to receive insights from PPIC by email.

Two devastating wildfire seasons have put Californians on edge about future fire risk. Their concern is reflected in PPIC’s latest Californians and the Environment survey. 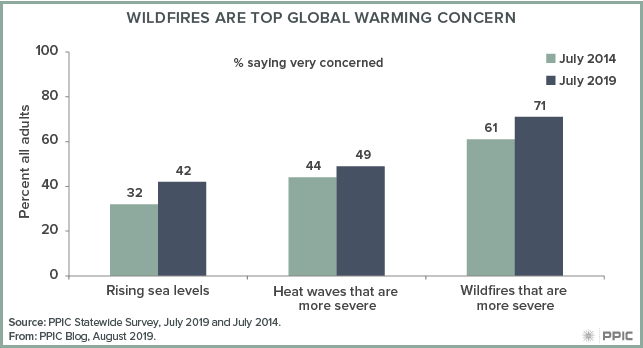 About six in ten Californians (63%) say that global warming has contributed to recent wildfires, a share that has remained steady in recent years. Today, residents of Los Angeles (71%) and the San Francisco Bay Area (69%) are the most likely to hold this view.

Back-to-back years of destructive wildfires brought attention to a lack of funding for post-fire recovery, especially following the Camp Fire, when PG&E faced record-high wildfire liabilities and filed for bankruptcy protection. Governor Newsom recently signed into law a $21 billion wildfire fund that will reimburse investor-owned utilities for payments they make to victims of wildfires caused by their equipment. The fund will be paid for evenly by utility investors and ratepayers.

PPIC’s survey found that the governor’s wildfire fund is favored by a majority of Californians (57%). Support is much higher in the San Francisco Bay Area (67%) than elsewhere. The plan is also popular among minority groups, with 73% of African Americans and 68% of Latinos in favor, compared to Asian Americans (55%) and whites (49%).

Post-fire recovery funding does not address the need to reduce wildfire risk factors, however. Our report Improving the Health of California’s Headwater Forests outlines reforms to ensure long-term forest health is a top priority for guiding agency rules, policies, and management practices in one of the more fire-prone areas of the state. It also describes ways to make the most of available funds for forest treatment needs.

The state has been taking steps in recent years to manage wildfire risks. In 2018 the legislature appropriated $1 billion for fire prevention and fuel reduction activities over five years. In April, the governor declared a state of emergency throughout the end of this fire season to spur proactive forest management, especially near high-risk communities.

This year’s state budget allocated significant financial resources to mitigate the funding gap in forest management as well. And the state just added 393 more firefighters to its ranks. Changes at the federal level in 2018 are also helping to reduce wildfire risk on federal lands. These changes give California a chance to increase the pace and scale of ongoing wildfire risk-reduction efforts and to prepare for a new wildfire reality.