Disadvantaged rural communities are disproportionately exposed to drinking water risks in California. Too many experience insecure supplies and contamination of their water sources. While there are growing efforts by policymakers to address water contamination, many communities will need further help to prepare for future droughts. Improved planning efforts could help avert water shortages.

Rural residents are more vulnerable to running out of water during droughts because they are more likely to rely solely on groundwater from small community wells or domestic wells. These wells tend to be relatively shallow, so they are susceptible to running dry when pumping lowers groundwater levels. During the 2012‒16 drought, farmers and cities pumped extra groundwater to make up for surface water shortages. Thousands of wells went dry―mostly domestic drinking water wells in rural communities, especially in the San Joaquin Valley. And roughly 150 small community water systems sought emergency assistance to keep the taps flowing.

Although the state’s Sustainable Groundwater Management Act (SGMA) is expected to lead to balanced groundwater use and reduce over-pumping in the long term, California’s highly variable climate means that groundwater levels will still drop during droughts. This could result in more drinking water wells going dry. In a recent submission to the California Water Data Challenge, several colleagues from UC Davis and I found that a drought similar to the latest one could cause more than 4,000 domestic wells to go dry in the Central Valley.

A recent PPIC report on managing drought in a changing climate offers two ideas for reducing these risks: 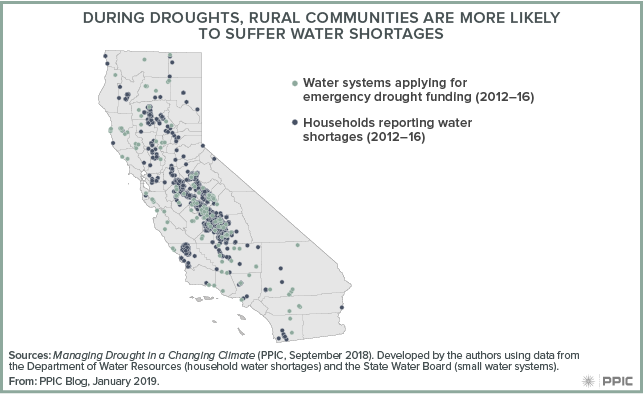