Mark Baldassare April 28, 2020
NEVER MISS AN UPDATE!
Sign up for our blog alerts to receive insights from PPIC by email.

This post is excerpted from Mark Baldassare’s prepared remarks for the PPIC Statewide Survey virtual briefing on April 23, 2020.

State funding for K–12 public schools will take center stage when Governor Newsom unveils revisions to the state budget in a few weeks. The growing fiscal toll of the COVID-19 crisis is likely to affect school funding plans as a deep economic recession looms. K–12 schools have the largest share of the state General Fund, and many Californians say it is their top priority for state spending. Still, California voters seem to be pulling back their support for school funding on ballot measures.

One of the biggest surprises in the March 3 primary was the defeat of the Proposition 13 state school bond (53% voted no). The last time a state school bond failed to pass was back in 1994. Proponents have tried to explain away this loss as confusion caused by the number 13—the same as the notorious anti-tax initiative that passed in 1978.

However, outcomes of local school bond measures point to a different story. Bucking recent trends, 63% of local school bonds on the March primary ballot failed to reach the 55% threshold needed to pass. It may be that early anxieties about COVID-19 resulted in voter caution about extending debt. In the absence of exit polls to validate this theory, the April PPIC Statewide Survey sheds light on what may have happened. It also offers sobering news for efforts to convince voters to support school funding measures in the November election.

First, though, let’s dispense with the notion that views about school funding have fundamentally shifted. Today, 55% of California likely voters say that state funding for their local public schools is not enough. And 53% would vote yes on a state school bond while 50% would vote yes on a local school bond. Moreover, 53% percent would vote yes on a split roll property tax to fund local public schools—a measure that appears headed for the November ballot. All of these results today are similar to those last April, suggesting that basic attitudes about school funding are fairly stable.

But current conditions appear to be having a strong effect on the timeframe for public support. Our survey was conducted from April 1 to 9—roughly a month from the primary and a few weeks into stay-at-home orders. We find that most likely voters say it is a “bad idea” to issue state (54%) or local (54%) school bonds at this time. Majorities of Californians without children in public school agree (bad idea: state 56%, local 57%). Fewer than half across the state’s regions say it is a good idea to issue these bonds now. Only those with children in public school think that it is a good time to issue state (57%) or local school bonds (58%). 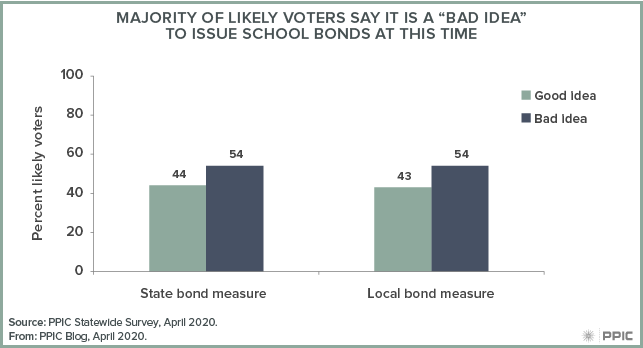 Why? Californians have had their world shaken by the COVID-19 crisis. Since January there has been a 36-point increase in expectations for bad economic times in California over the next 12 months (42% to 78%)—sending us to depths of consumer pessimism not seen since the Great Recession. And right now, 74% percent are worried about negative impacts of the coronavirus on their personal finances. 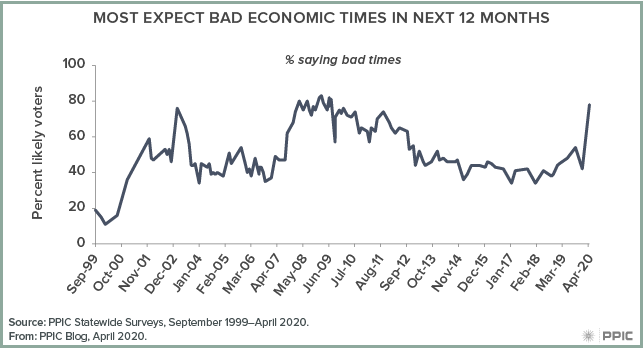 This pessimism is likely to have profound implications for school funding measures on the November ballot. The state’s fiscal and economic problems will weigh heavily on voters’ minds when they are asked to make decisions on spending, taxes, and bonds. Many may be reluctant to ask taxpayers (like themselves) to foot the bill, or to increase commercial property taxes, to make up for shortfalls in school funding.

Our surveys will be closely monitoring all of these dynamics as California heads toward a much-anticipated November presidential election.