With many child care centers closing due to the pandemic, early education has emerged as an important policy priority at the federal and state levels. President Biden recently announced the American Families Plan, which would invest $200 billion toward free universal preschool for all three- and four-year-olds, regardless of income. And last December, Governor Newsom established a goal of universal preschool for all four-year-olds and income-eligible three-year-olds in California. PPIC’s April survey found that overwhelming majorities of Californians say preschool is important, and most support a state-funded preschool program for four-year-olds.

About eight in ten California adults and parents say attending preschool is very or somewhat important to student success in K–12 education. Among all adults, this share has remained steady since last April, but the share of parents saying preschool is at least somewhat important has decreased since last year (58% very, 32% somewhat). Today, residents of Los Angeles (55%) are the most likely to say preschool is very important (49% San Francisco Bay Area, 46% Central Valley, 43% Inland Empire, 37% Orange/San Diego). 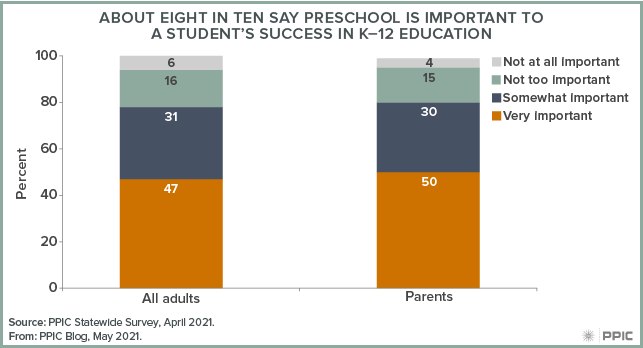 When asked if the state government should fund voluntary preschool programs for all four-year-olds, most Californians (68%) and parents (78%) express support. Similar shares were in favor last year (65% adults, 80% parents). Today, majorities across regions and racial/ethnic groups say the state should fund voluntary preschool programs, though African Americans (84%) and Latinos (81%) are more likely than Asian Americans (63%) and whites (57%) to express support. Partisan views also vary widely, with 82% of Democrats, 63% of independents, and 41% of Republicans in favor. 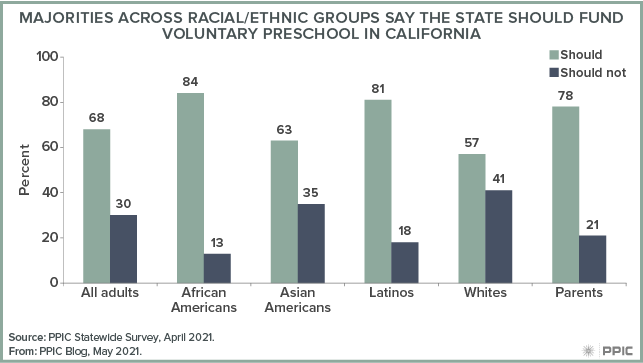 Biden’s proposal for early childhood education faces an uncertain future in Congress, and Newsom’s plan could see some changes with the upcoming May Revision. Amid the ongoing conversation about the affordability and accessibility of quality preschool, PPIC will continue to track Californians’ attitudes on early education and related issues.