The Coronavirus Pandemic Will Test the State’s Budget Reserves

Radhika Mehlotra, Jennifer Paluch April 20, 2020
NEVER MISS AN UPDATE!
Sign up for our blog alerts to receive insights from PPIC by email.

As it grapples with the COVID-19 pandemic, California faces an uncertain fiscal future. This global crisis has caused a sharp decline in economic activity, exposing crucial sectors to heightened risk. As discussions continue about when and how to re-open the economy, it is clear that the state will have to respond to significant fiscal challenges.

The good news is that California has made important changes to its reserve policies since the Great Recession. The passage of Proposition 2 (2014) created the Budget Stabilization Account—the state’s rainy day fund—as well as the Public School System Stabilization Account, a separate reserve for K–12 districts and community colleges. In addition, Governor Brown and the legislature created the Safety Net Reserve Fund to shore up Medi-Cal and CalWORKs funding during downturns.

The bad news is that a severe recession is likely to pose significant budgetary challenges. Drawing from the state’s experience during several recent recessions, PPIC estimated the budget ramifications of mild, moderate, and severe recessions and the capacity of state reserves to fill gaps. We found that the state’s reserve balance—estimated to be $17.9 billion—is large enough to withstand a mild recession such as the dot-com bust in the early 2000s.

However, a long and/or severe recession like the early 1980s oil shock (which lasted four years), or the early 1990s slump and the Great Recession—both of which were much more severe and lasted five years—would create large budget gaps and require policymakers to make difficult decisions. (It is important to note that the estimated reserve balance relies on the 2019–20 enacted budget and that it will change when revenue estimates are updated in May.) 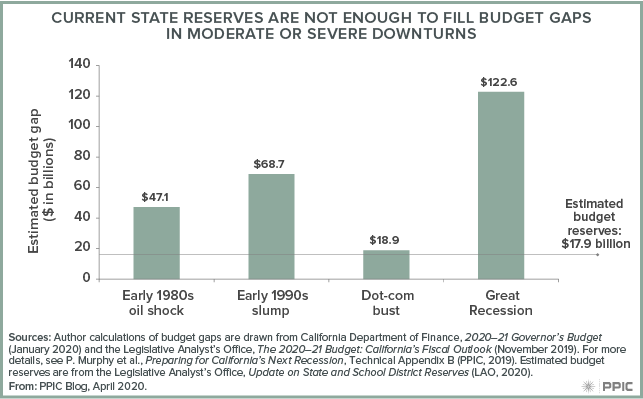 In the meantime, the federal government has stepped in. The Families First Coronavirus Response Act includes an increase in the federal share of Medicaid payments and reimbursements to states that are expanding public assistance programs. The Coronavirus Aid, Relief, and Economic Security (CARES) Act provides about $2.2 trillion; some aid goes directly to families, some goes to schools, and some to state and local governments. Additionally, two federal disaster declarations make many of California’s COVID-19 expenditures eligible for at least partial reimbursement.

The state is also making significant changes to the 2020 budget process. The Department of Finance is drafting a “workload” budget for the May Revision that will set the baseline for the final budget to be enacted in June. This will limit spending increases while allowing for growth in programs—particularly safety net programs—that expect increased demand. The legislature will revisit the budget for an “August Revision” that reflects changes in the state’s financial condition. As these processes move forward, PPIC will continue to monitor California’s evolving fiscal challenges and steps being taken to address them.