As California responds to COVID-19, its low-income workers face particularly urgent difficulties. These Californians are not necessarily at high risk of health complications from COVID-19, but they will be deeply affected by the economic consequences of the steps being taken by cities, counties, and regions to contain the outbreak and protect public health.

The largest number of poor and near-poor Californians live in Los Angeles County (about 4 million), followed by the Bay Area (about 2 million). 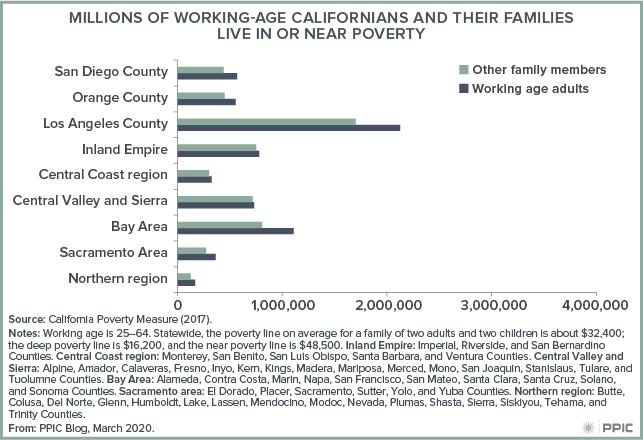 The federal and state governments have been developing a range of short-term measures that promise to bolster the resources of Californians who are economically affected by this public health emergency. These measures include the expansion of food assistance benefits, paid sick leave, and unemployment benefits.

Steps like these are important because 12.2% of California’s working adults live in poverty, and after-tax income from work makes up 72% of poor and near-poor family resources, on average. A loss of $500 in annual income would push an additional 215,000 Californians into poverty, while a loss of $1,000 would put an additional 425,000 Californians below the poverty line. In short, even a relatively small financial loss can make a big difference.

One Year Later, Is California on the Road to Recovery?