The Democratic Presidential Primary: What Do Californians Care About?

Mark Baldassare December 6, 2019
NEVER MISS AN UPDATE!
Sign up for our blog alerts to receive insights from PPIC by email.

Mark Baldassare, PPIC president and CEO, and director of the PPIC Statewide Survey, participated in a panel on election issues at the Pacific Chapter of the American Association of Public Opinion Research meeting on December 6, 2019 in San Francisco. This post is excerpted from his prepared remarks.

Californians are turning their attention to the March 3 Super Tuesday primary as they play a new role in deciding the next Democratic presidential nominee. This is unfamiliar territory for California’s Democratic primary voters, who have become accustomed to casting ballots in June after other states have already determined the winner of their party’s presidential sweepstakes.

The 2019 PPIC surveys have consistently identified three frontrunners—Joe Biden, Bernie Sanders, and Elizabeth Warren—with no clear favorite. At the same time, likely voters have signaled an openness to considering alternatives. In this context, the debates loom large, and eight in ten likely voters in the September PPIC survey say they are important (41% very, 43% somewhat) in deciding their vote.

What do California’s Democratic primary likely voters most want to hear from the candidates as the stage is being set for a December 19 Democratic debate in Los Angeles? In an open-ended question in the November PPIC survey, the top four issues mentioned are health care (21%), the environment (14%), jobs and the economy (13%), and immigration (12%). Several other issues—such as education, homelessness, housing affordability, gun control, crime, and taxes—are each mentioned by less than one in ten likely voters. 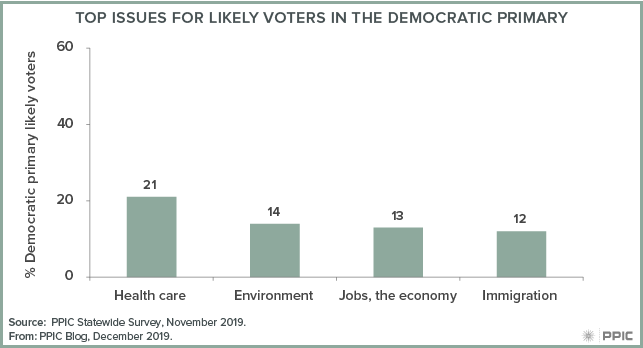 One area of strong consensus? Views of President Trump. In the November PPIC survey, 91% of California Democratic primary likely voters say they disapprove of President Trump and 84% support his impeachment and removal from office.

When asked what’s more important, nominating a candidate who seems most likely to defeat Trump or one whose positions on issues are closest to theirs, 55% want to defeat Trump, while 36% want alignment on positions. Since the May PPIC survey, support for impeachment (65% to 84%) and the importance of nominating an electable candidate (48% to 55%) has risen. 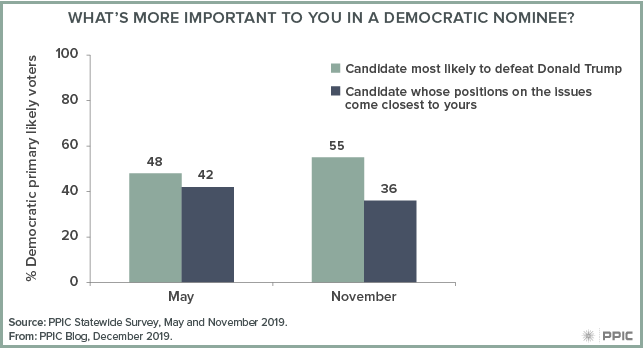 Those who say that electability is most important, compared with those who say policy positions are most important, are more likely to mention health care (25% to 15%) and less likely to name immigration (7% to 18%) as the issue that they most want to hear about in the presidential debates. We find no differences between these two voter groups in the mention of the environment or jobs and the economy. Interestingly, education (11% to 2%) is noted more often among those who say that alignment on the issues is more important to them.

The Los Angeles debate is the next big opportunity for the presidential candidates to connect with California voters whose preferences are still being formed. Many Democratic primary likely voters already report that they are closely following the election news, but the debate could still result in an expanded electorate—and a scrambling of the race—if candidates connect with voters on issues that matter the most to them.

Throughout 2020, PPIC surveys will be monitoring what is likely to be an historic year for voter participation, as Californians engage in a consequential primary and a highly anticipated general election.

LEARN MORE
PPIC Statewide Survey: Californians and Their Government
The Mood of California Voters and the 2020 Election Cycle