Unemployment Benefits in the COVID-19 Pandemic

Today, the US Department of Labor revealed that 925,450 Californians filed initial unemployment insurance claims during the week ending April 4. This makes for a record-breaking three-week period during which nearly two million claims were filed in California, representing roughly 10% of the labor force. What kind of benefits can these millions of newly unemployed workers receive? 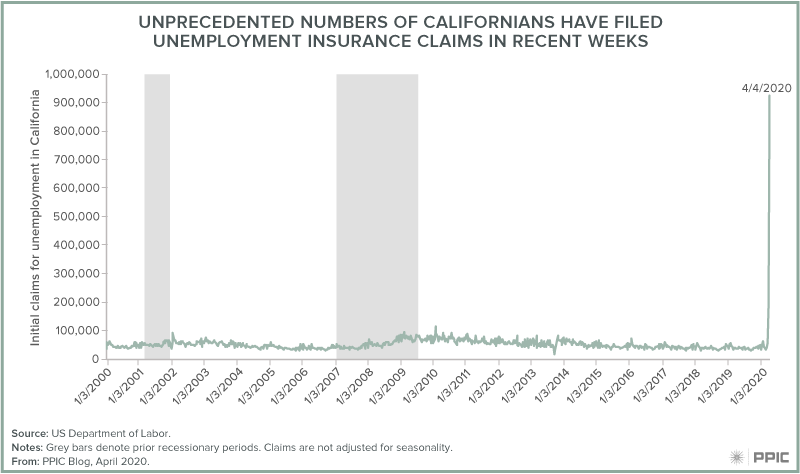 Typically, Californians who qualify for unemployment receive a maximum of $450 per week as long as they are actively looking for work, and that assistance can last for up to 26 weeks. (Notably, benefits in California are less generous than those in most other states: in 2019, its average weekly benefit of $345 ranked 29th.) However, federal policymakers are responding to unprecedented circumstances; so far, they have expanded both eligibility and benefits.

Federal legislation temporarily expands eligibility. The Coronavirus Aid, Relief, and Economic Security (CARES) Act makes self-employed Californians—including gig workers and other independent contractors—who are unable to work or have had hours reduced by COVID-19 eligible to receive benefits. Also, laid-off workers who expect to return to their current jobs are not required to be searching for work.

The new law also supplements and extends benefits. The CARES Act provides $600 per week on top of typical benefits for up to four months. This represents a dramatic boost for most unemployed Californians. The legislation also covers the cost of a 13-week extension of benefits, so that laid-off workers can now receive unemployment for up to 39 weeks.

Unemployed Californians who earn less than $4,000/month would normally qualify for a benefit that replaces roughly half of their earnings, and the benefit covers a smaller and smaller share of earnings above $3,894/month. The $600 federal supplement is higher than California’s maximum benefit and more than covers prior earnings for many unemployed Californians. 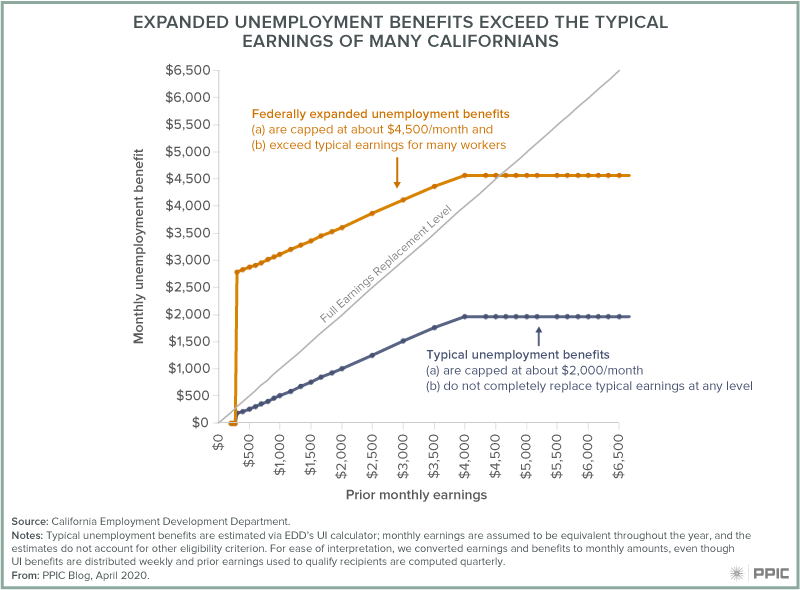 It is likely that workers in the state’s hardest-hit sectors make up a large share of early applicants for unemployment benefits. In the accommodation and food service industry—one of the hardest-hit sectors—the average monthly wage is roughly $2,000; an unemployed worker could receive up to $3,700 per month. The average worker in transportation and warehousing, another impacted industry, earns more than twice as much ($5,000/month), but unemployment benefits for this worker would be only slightly higher: up to $4,550 per month.

These expanded benefits will help millions of newly unemployed Californians, but the state and its workers face important limitations and challenges. Given the massive surge in applications, workers may have to wait several weeks—or months—to receive benefits. Moreover, laid-off immigrants who are unauthorized to work in the US will have to rely on other support.

More generally, California’s unemployment insurance fund reserves are inadequate to weather even a mild recession, although the federal government steps in to loan the funds when needed. In the longer term, policymakers should seriously consider reforms to the unemployment system, so that it can respond quickly and comprehensively in the next economic crisis.

One Year Later, Is California on the Road to Recovery?