Views of California’s Economy Vary by Race and Income

As many Californians continue to grapple with the financial impacts of COVID-19, 72% of adults think the state is in an economic recession, and 41% are worried that they or someone in their family will lose their job in the next year, according to PPIC’s January survey. Amid a backsliding economy, we see considerable racial/ethnic and income disparities in Californians’ views of the recession and concerns about job loss. 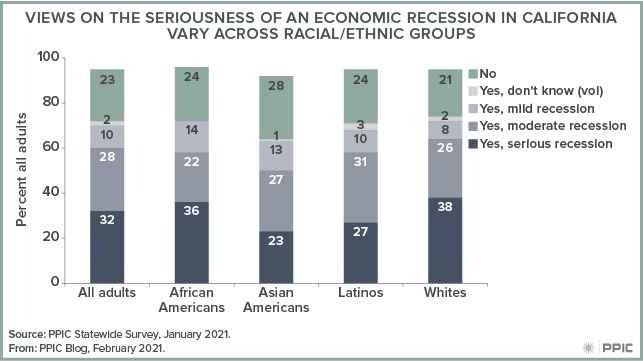 Lower-income Californians, who are more likely to be financially affected by the pandemic, are especially concerned about job loss. Despite similar views across income groups on the seriousness of the recession, nearly half of adults earning under $40,000 (48%) are concerned about losing their job in the next year (38% $40,000 to under $80,000, 33% $80,000 or more). Racial/ethnic disparities are also large: African Americans (55%) and Latinos (50%) are much more likely than whites (35%) and Asian Americans (22%) to be concerned about job loss. 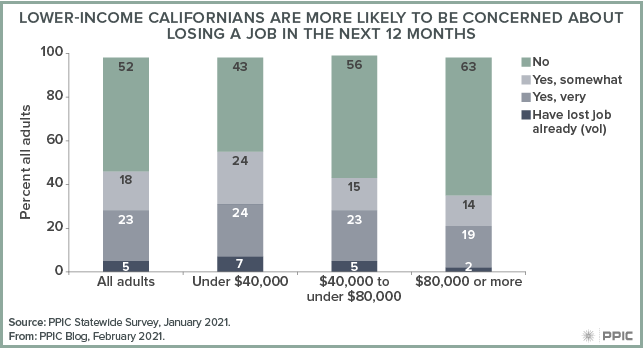 Not only are lower-income Californians more likely to be concerned about losing a job, but they also may lack a financial buffer to get through periods of income loss. Overall, 16% of California adults say their personal finances are in poor shape. However, 29% of adults earning less than $40,000 say they are in poor shape financially, compared to 14% of those earning $40,000 to under $80,000 and only 4% of those earning $80,000 or more. Once again, there are striking differences across racial/ethnic groups: 24% of African Americans and 21% of Latinos say their personal finances are in poor shape, compared to 14% of whites and 9% of Asian Americans.

When our January survey was in the field, Governor Newsom lifted the statewide stay-at-home order and California reverted to its four-tier system for reopening businesses. Although 54 of the state’s 58 counties remain in the most restrictive tier, some businesses are now permitted to reopen with appropriate safety protocols in place. Is this the first step toward economic revitalization? PPIC will continue to monitor Californians’ perceptions of the economy as the state takes strides toward an equitable recovery.