Voting Problems in March May Have Discouraged Some LA Voters

The coronavirus pandemic has created serious concerns about in-person voting across the country. Many jurisdictions have struggled to staff voting sites, and the flow of voters will need to be regulated to reduce transmission risk. These constraints could create voting backlogs on Election Day, increasing the risk of voters getting frustrated and giving up.

The March primary in Los Angeles County may offer a case study of voting backlogs affecting turnout: the county has been working to fix technical problems at its in-person voting sites that created backlogs and long lines.

The root of LA’s problems was a new electronic system at in-person voting sites that unexpectedly struggled to keep up with the volume of voting on Election Day. At the same time, the county implemented the Voter’s Choice Act (VCA), which involved replacing neighborhood polling places with a smaller number of large “vote centers” where any voter could cast a ballot. The VCA requires that all voters receive a vote-by-mail ballot, but LA received permission to postpone that part of the law for many Angelinos.

In general, the VCA has facilitated higher turnout. Turnout increased an average of 1.5% in the 14 counties (other than LA) that implemented the VCA between the primaries in 2016 and 2020, while it declined about 1% in the 43 counties that did not make the change.

A similar comparison is possible within LA County, because the part of the county that shares state legislative and congressional districts with Orange County did a “full-VCA” implementation—switching to vote centers and sending every voter a mail ballot. Turnout dropped 0.3% in the full-VCA portion and 4.0% in the rest of LA. At face value, this suggests that getting a ballot in the mail made a larger difference in LA, where in-person voting was especially challenging. 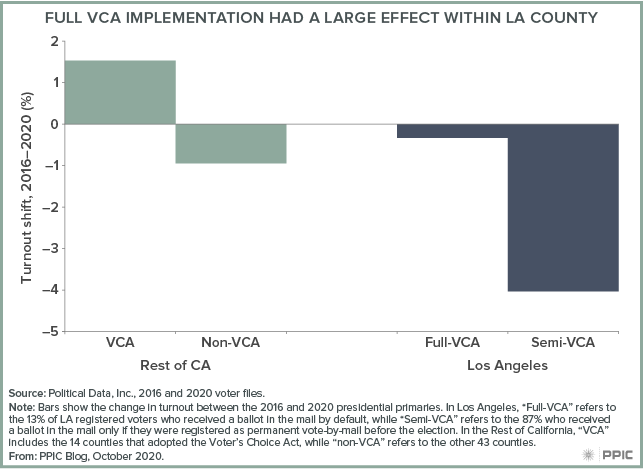 The effect was even larger for voters registered as preferring to vote in person. In the rest of California (outside LA), these voters turned out 3.6% more in VCA counties; within LA, the same gap was 6.7%. The difference was not so much in the full-VCA portion of LA—where in-person voters had largely the same options as VCA voters anywhere—but in the rest of the county, where in-person voters did not get vote-by-mail ballots and ran into the problems with the new electronic system.

LA has been working to fix its voting problems, and the state has mandated that every voter receive a mail ballot for the fall election to reduce the risk of coronavirus transmission. So LA voters are unlikely to face the same challenges in November. But clear signs that LA’s problems led to lower turnout should serve as a warning for jurisdictions in California and elsewhere. Backlogs at in-person sites can lead to voter frustration, and some people will likely give up and go home. A smooth in-person process will be important to ensuring that every voter who wants to cast a ballot can do so.