The DCP is the fruit of a decade of negotiations among the seven basin states to resolve the over-allocation problem through cuts and water storage. (Mexico receives water from the river but is not part of this plan.) California has the largest share of the Colorado, with senior rights to more than a quarter of the river’s average annual flow. 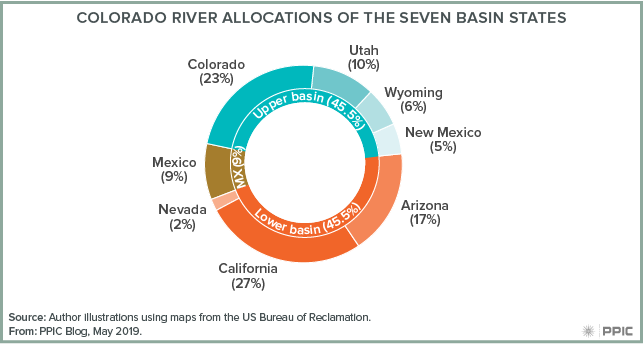 Lake Mead is a water source for 600,000 acres of farmland and 19 million people in Southern California. California agencies can also store up to 250,000 acre-feet of water in Lake Mead.

Without the DCP, Lake Mead’s water level could drop too low to allow releases from Hoover Dam. As the lake nears this threshold, senior water right-holders in California might be tempted to withdraw their water before it becomes inaccessible. While such a move would be permissible, it would accelerate the drop in the lake level and affect future deliveries for junior water right-holders in the other lower-basin states.

The DCP eliminates this concern and delivers an orderly and mutually agreed upon method to manage shortages until 2026. It provides assurance against curtailments for water stored behind the dam. This is especially important for the Southern California water agencies, whose ability to store water in Lake Mead is crucial for managing seasonal demands.

Some significant challenges must still be addressed, however. The Imperial Irrigation District, the largest Colorado River water user, opted out of the plan due to a dispute over funding to restore the shrinking Salton Sea. The district also filed a lawsuit that calls for the DCP to be suspended until an environmental review of the plan is completed.

The lawsuit alleges that the Metropolitan Water District (MWD), which would contribute most of the water required to fulfill California’s obligations under the DCP in times of system-wide shortage, unlawfully approved the DCP. IID claims that MWD did not consider the “sources of water that would be necessary for [it] to fulfill its commitment and the environmental effects associated with obtaining water for those sources.” The outcome of this lawsuit is uncertain.

Currently, the Colorado supplies about a third of all water used in Southern California’s urban areas. The region’s water agencies are taking steps to develop more local supplies and increase water efficiency to help them meet water demand if DCP cuts are triggered during a future water shortage.

The plan won’t cause immediate water cuts. This year’s wet winter means that Lake Mead’s elevation, currently 1,090 feet above sea level, may remain above the 1,045-foot threshold at which the mandate is triggered for California. But the basin states now have a plan in place to address the next dry spell.