What’s the Plan to End Groundwater Overdraft in the San Joaquin Valley?

In the midst of the COVID-19 crisis, work on managing groundwater for long-term sustainability continues, as required by California’s landmark Sustainable Groundwater Management Act (SGMA). In January, water users in 21 critically overdrafted basins delivered their groundwater sustainability plans to the state Department of Water Resources. In this series, we examine the 36 plans submitted for 11 critically overdrafted basins in the San Joaquin Valley—California’s largest farming region. PPIC has done extensive work on what SGMA means for this region, where excess pumping is a major challenge. This post examines how the plans propose to end overdraft.

What are the options for ending overdraft?
SGMA requires water users to bring their groundwater basins into long-term balance over the next two decades. Although there are no easy solutions, the math is simple: bringing these basins into balance will require expanding water supplies, reducing water demands, or a combination of these two approaches.

Our in-depth study of water solutions for the San Joaquin Valley found that about a quarter of the region’s 1.8 million acre-feet (maf) of annual overdraft could be filled with new supplies at a cost that local water users can afford. Among supply options, by far the most promising approach is expanding groundwater recharge: storing more of the runoff from large storms in underground aquifers. Filling the remaining three-quarters of the gap will likely require demand reductions. Since agriculture is the predominant water user, this will entail taking some farmland—at least 500,000 acres—out of production. Giving farmers the flexibility to trade water—so it can be used on the most productive lands—can reduce the costs of ending overdraft by two-thirds.

What do the new groundwater sustainability plans propose to do?
As the figure below shows, the plans consider a range of projects on both the supply and demand sides. Together, these projects would yield roughly 2.2 maf per year—in principle, enough to end regional overdraft. However, the plans invert our estimates: they assume that new supplies will account for more than three-quarters of the total, while demand management will save less than one-quarter. In line with our analysis, the single biggest new supply is recharging groundwater basins with more floodwater: the plans target roughly 1 million acre-feet annually, primarily through many small, local projects. Big infrastructure investments—such as new surface reservoirs and regional aqueducts and canals—are largely left out. 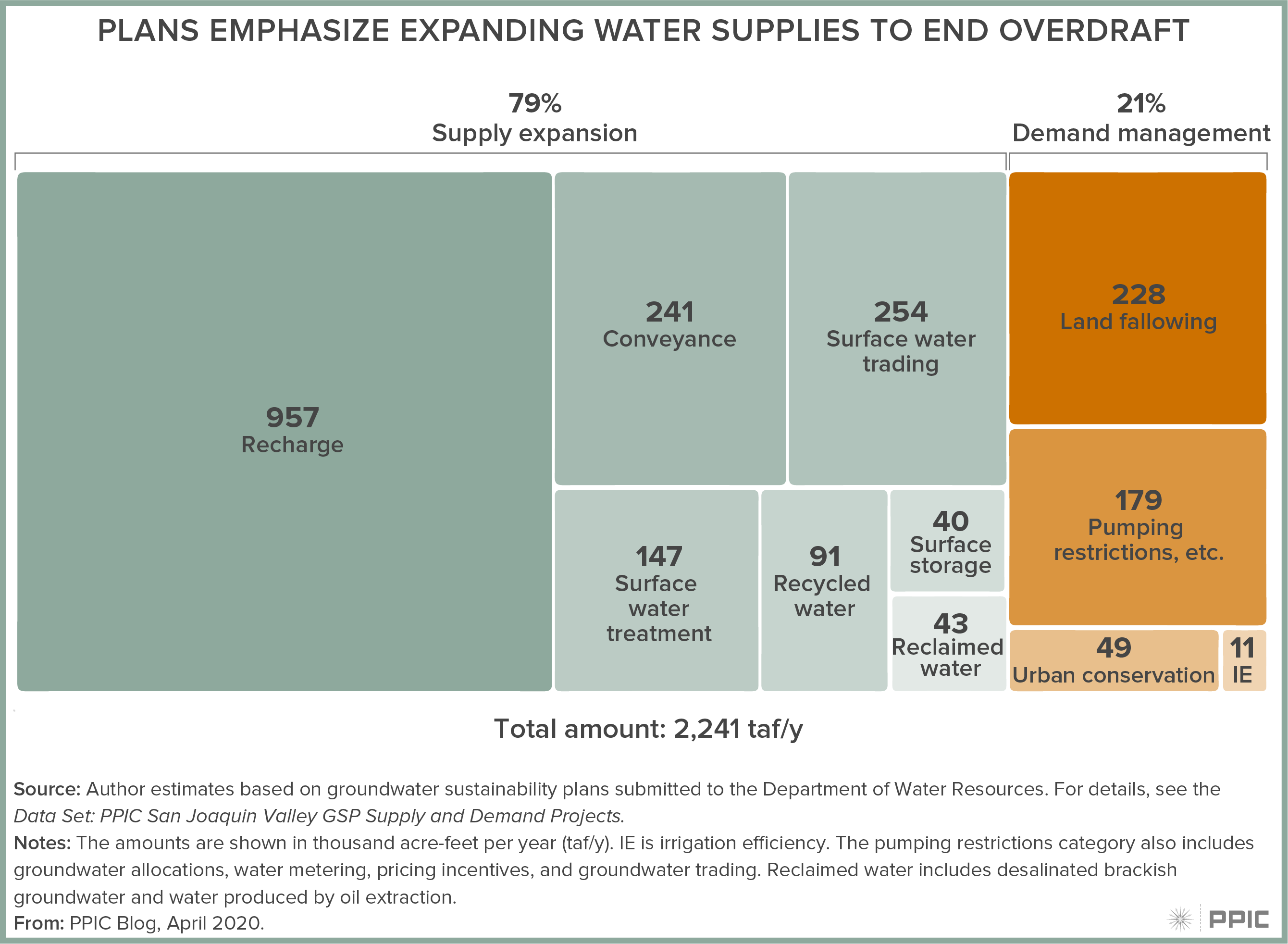 Are the goals for expanding supplies realistic?
Probably not. When it comes to recharge, water users will be competing for floodwater that can be feasibly captured—likely a much smaller volume than the total envisaged by the plans. Although that total might be physically available for recharge, there are serious capacity constraints to getting it underground. A central challenge is moving very large volumes of water to storage sites quickly. Addressing this challenge is likely to require regional investments in conveyance, and greater efforts to coordinate the management of surface and groundwater storage infrastructure in order to expand their combined impact. Even then, it is probably not feasible to capture all available water in very wet years.

There are also limitations for the other supply options. Most surface storage and surface water treatment projects will be looking to capture the same high flow water as recharge projects—heightening the competition for these supplies. And most surface water trading and recycled water projects will shift available supplies from some water users to others within the region, rather than causing an overall increase in regional supplies.

What about the plans for reducing demand?
For the most part, the plans fall short on their analysis of demand management. Since reducing water use in this region largely means reducing the amount of irrigated cropland, there’s been reluctance to seriously consider the demand side at this early stage of SGMA implementation. But it’s encouraging that at least some plans are starting to look at such options. Several plans propose tools for managing demand flexibly—for example, groundwater trading, fees tied to volumes pumped, and monetary incentives for land fallowing.

What’s next?
These new plans are an early step on the path toward groundwater sustainability. As implementation gets under way, early actions—such as piloting new approaches to manage demand flexibly and coordinating on smart and affordable supply investments—can lay the foundation for long-term success.

Note: The underlying data and additional notes on supply and demand options identified in these plans can be found in Data Set: PPIC San Joaquin Valley GSP Supply and Demand Projects.

A Winning Approach for Managing Groundwater in the San Joaquin Valley

What Every Californian Should Know About Groundwater