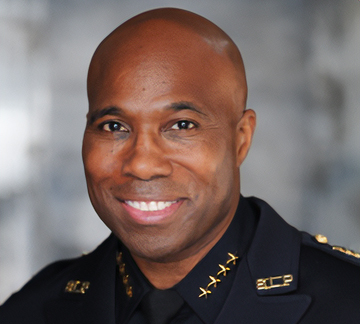 Abdul D. Pridgen is chief of the San Leandro Police Department. Throughout his career, he has put systems in place to increase the public’s confidence in the police, reduce crime, and assure that policing for safety, not incarceration, is each officer’s focus. Prior to his appointment in 2021, he led the Seaside, California, Police Department, where his department priorities were procedural justice, transparency, and winning the community’s trust. Before serving in Seaside, he honorably retired from the Fort Worth Police Department after almost 26 years of service. He was promoted through the ranks and was appointed as second-in-command in 2009, becoming the first and only Black assistant chief. He was known for his effectiveness at employing evidence to drive organizational change and for his principled approach, promoting ethical policing and fostering a culture of answerability. He is a senior advisor for Measures for Justice, a member of the executive committee for Fight Crime: Invest in Kids, on the board of directors for the Boys and Girls Club of Monterey County, president of the California Police Chiefs Association, and president of the Institute for Transparent and Accountable Policing. Before entering law enforcement, he was a sailor in the armed forces, serving in Desert Storm. He was honorably discharged and retired from the US Navy Reserve as a chief petty officer. He holds a BS in criminal justice and an MA in public administration. He is a graduate of the Southern Police Institute, FBI National Academy, FBI National Executive Institute, and Harvard Kennedy School, Senior Executives in State and Local Government.