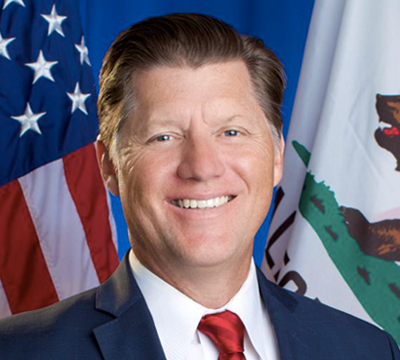 Brian W. Jones was born on a military base in Austin, TX, and his family moved from Colorado to San Diego County when he was ten years old. He attended Grossmont College and earned his bachelor’s degree in Business Administration at San Diego State University. Brian has pursued many opportunities including general manager at a local pizza franchise, car salesman, associate pastor, and a commercial real estate agent. Brian and Heather met while working at the local pizza franchise.  They have been married for 28 years and currently live in Santee. They enjoy spending time with their three adult children Christopher, Matthew, Melina, and her husband, Justin. In his free time, Brian loves anything outdoors; he is an avid mountain biker, adventure motorcyclist, occasional hunter/angler, and is always trying to find time to explore every state park in California.

As an avid constitutionalist, Brian cares deeply about freedom and liberty. Driven by his commitment to improving the quality of life in his community, Brian first found his passion for public service as a Santee City Council Member from 2002-2010 and then again from 2017-2018.

Brian took this passion for his community to the state level when he was elected to represent California’s 77st Assembly District from 2010-2012 and California’s 71st Assembly District from 2012-2016. In the Assembly, Brian focused on creating a better economic environment for small businesses and supporting our Armed Forces members and veterans. He sponsored several notable legislative measures including his “Made in America” legislation, which makes it easier for manufacturers to do business in California, and legislation supporting the expansion of the craft beverage industry.

Brian has served in the California State Senate since 2018. He represented California’s 38th Senate District from 2018-2022. In 2022, Brian was elected to represent California’s 40th Senate District. Brian is proud to serve as the Senate Minority Leader of the California Senate Republican Caucus. He also serves as the co-Chair of the Senate Outdoor Sporting Caucus. In the Senate, he has sponsored legislation that tackles homelessness, keeps our communities safe, lowers the cost of living, and removes bureaucratic barriers for businesses and Californians. Brian is known for his Are You Kidding Me? videos that shine a light on the nonsensical policy often coming out of Sacramento.

In 2020, Brian was appointed to the California Commission on Disabilities and Access. Brian proudly serves as the Vice-Chair of the Senate Appropriations Committee. He also sits on the Senate Insurance Committee and the Senate Governmental Organization Committee.