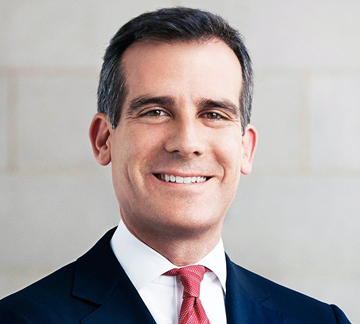 Eric Garcetti is the 42nd mayor of Los Angeles. Born and raised in the San Fernando Valley, his life has been shaped by a deep commitment to the core values of justice, dignity, and equality for all people. During his tenure, he led and won a campaign to fund a once-in-a-generation expansion of public transportation; he launched the L.A. College Promise, serving more than 15,000 students, many of whom are overcoming poverty and are the first in their families to pursue higher education; he is leading an unprecedented regional alliance committed to getting people off the streets and ending chronic homelessness; he raised the minimum wage to $15 an hour and cut business taxes to help drive an economic recovery that has created a record number of jobs in legacy industries like entertainment and aerospace.

On the national and international stages, he rallied more than 400 mayors in cities across America to adopt the Paris Climate agreement; he led the first National Day of Action on Immigration, and has put unprecedented local resources toward providing Dreamers and others with legal aid to fight deportation; and he successfully led the bid to bring the 2028 Summer Olympic and Paralympic Games to Los Angeles.

Before his time at City Hall, he served as an intelligence officer in the US Navy Reserve, and taught at the University of Southern California and Occidental College. His government service began on the L.A. City Council, where he spent four terms as council president before being elected mayor in 2013 and winning re-election in 2017. He received his BA and MA from Columbia University, was a Rhodes Scholar at Oxford University, and studied at the London School of Economics.