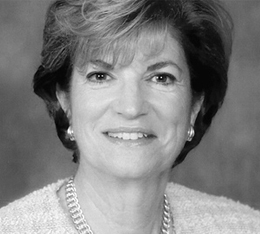 Joanne Kozberg is a principal in the Los Angeles office of California Strategies, LLC. She has helped corporations develop philanthropic public affairs plans, managed high-profile public policy think tanks, worked with major foundations, and helped nonprofits secure funding from the private and public sector. Previously, she served as Secretary of State and Consumer Services for then-governor Pete Wilson. In that capacity, she managed an agency with 14,000 employees, a $1.4 billion budget, and 12 departments, including Consumer Affairs, General Services, the Public Employees’ Retirement System, the Franchise Tax Board, and the Building Standards Commission. She also served as director of the California Arts Council. During Wilson’s terms as US senator she was his senior policy consultant for entertainment and film, transportation, land use, arts, and other issues. She is a regent emeritus of the University of California, trustee emeritus of the J. Paul Getty Trust, and a past board member of the California Community Foundation. She was president and chief operating officer of the Music Center of Los Angeles County. She earned a BA from the University of California, Berkeley, and an MA in public policy from Occidental College. She is a graduate of the Coro Fellowship program.